FLASH! in the Pans 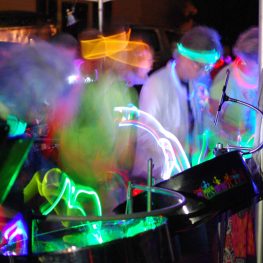 DUE TO RAIN, this event has been moved to HAMMOND HALL in downtown Winter Harbor. Show starts at  7 pm.

In Partnership, Schoodic Institute and Schoodic Arts for All presents,
FLASH! in the Pans, a benefit concert.

FLASH! in the Pans is a steel drum band out of Blue Hill, is so upbeat and full of excitement, that it’s nearly impossible to not want to get up and dance! FLASH! is one of the largest community steelbands in the United States. Formed in 1990, members of FLASH! find as much joy in playing the steel drum (known as pan) as they do in sharing their music with enthusiastic audiences of all ages, from infants to centenarians.

Bring your whole family!  Popcorn, cotton candy, soft pretzels and Darling’s Ice Cream Truck.  Also include, bring something to sit on and your dancing shoes!

In case of rain, concert will be held in Hammond Hall in downtown Winter Harbor.