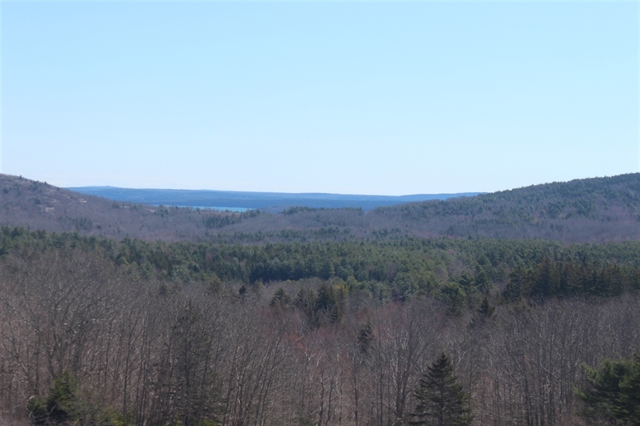 In early spring, Acadia is at its brightest. Leaves have yet to emerge on the trees and the sun shines more directly on earth and sea. Days lengthen, shadows recede, and the woods are filled with light and birdsong, the sky a bluer blue.

Does the sky seem especially blue this year?

Clearer skies have been reported from around the globe, as fuel-burning activity slows due to the COVID-19 pandemic. Mountains and valleys once concealed by haze are visible, now that the air has fewer particles to absorb and scatter sunlight.

Air quality is of particular concern at Acadia National Park. Though located in a relatively rural area, the park is sensitive to polluted air masses that drift across the continent or blow in from the Atlantic Ocean. The Clean Air Act designates Acadia as a “Class I” area, with special air quality regulations to protect visibility; reduce particles and ozone that can cause breathing problems, heart stress, and other health issues; and control for acid rain.

Biologist Bill Gawley manages the park’s air monitoring program, established in 1980 and one of the most comprehensive in the National Park System. Air quality measurements are among the few data that are being collected this spring, as most other research is on hold.

In early April, Gawley noticed an unusually high precipitation pH, a measurement of acidity. He wondered if it was a result of pandemic-induced cleaner air. Analysis of other data, however, show a murkier picture.

Ozone and particulate levels were low in the early part of the month, but returned to typical levels. Nitrogen compounds, which derive from farther away, were very low.

Across Maine and the Northeast, nitrogen dioxide concentrations showed the most change as a result of reduced traffic, according to Tom Downs, Atmospheric Science and Analysis Section Manager in the Bureau of Air Quality at the Maine Department of Environmental Protection. Nitrogen dioxide levels, which are not measured at Acadia, are averaging about 26 percent lower in the Northeast and 12 percent lower in Portland, Maine.

The major factor contributing to noticeably clearer skies is fewer contrails from commercial jets, said Downs. Along major roadways in more urban areas, fewer vehicles are stirring up road dust that can contribute to particle pollution. “Near-road particle pollution levels in major metropolitan areas in the Northeast are 35 percent lower than during the same period (March 21 – April 28) in 2019. Particle pollution levels at more rural sites in the Northeast are the same or higher than in 2019. Levels at the McFarland Hill site are slightly higher than in 2019 but at very low levels,” said Downs. The weather has a strong influence on air pollution in a given day or month, and cool temperatures meant that people locally were burning wood and oil for heat, which may have contributed to higher particulates, said Bill Gawley of the National Park Service. Both the park and the state monitor the air in Acadia.

What the data from March and April of 2020 do show, however, is the continued impact of the Clean Air Act.

There was a time, not too long ago, when the air was unhealthy to breathe for weeks every year, when a visitor to a mountain summit in Acadia couldn’t see beyond the surrounding bays, when sunlight itself was endangered. Haze, or reduced visibility, occurs when ambient particulate matter and gases intercept light before it can reach human eyes. Atmospheric scientists call this “light extinction.”

Air pollution has been a major subject of research in the park. Scientists have linked pollution in coastal Maine to plumes of ozone from the Boston and New York areas, smoke from Canadian wildfires, and mercury and acid rain from coal-fired power plants in the Midwest. Acadia’s granitic bedrock, thin soils, evergreen forests, high elevations, and clear lakes and streams have little capacity to buffer against incoming acid-forming chemicals, which can be toxic to wildlife and plants. Researchers documented impaired growth of white pine due to ozone, and damage to red spruce from acidic fog. Nitrate concentrations in some streams in the park were chronically elevated, suggesting nitrogen had saturated the soils of the older forests.

The primary monitoring station is at McFarland Hill, across the road from park headquarters. A week’s worth of rain is collected, tested for preliminary pH and conductivity, and then sent to a national laboratory in Wisconsin. Other instruments measure visibility, ozone, etc. Acadia is part several national, multiagency air pollution networks, such as the National Atmospheric Deposition Program, which shows reductions in sulfur and nitrogen deposited by rain, snow, fog, and dust.

While acid rain, mercury, ozone, and haze have all decreased over the last forty years, they persist at large enough concentrations to affect Acadia’s sensitive ecosystems, wildlife, and plants. And burning fossil fuels also is the primary source of carbon dioxide and other climate-warming greenhouse gases that are changing the Acadia environment.

“Sulfur and nitrogen have decreased very significantly in the past 35-40 years, but since 2008 the trend has been relatively flat,” said Gawley. “To me, this suggests that though there’s been a notable reduction in these pollutants thanks to the Clean Air Act, we’ve probably reached the limit of what the law can accomplish. We’d likely need further reduction of emissions to affect any further improvements, and any reversals of regulations—and subsequent emission increases—could quickly reverse the improving trend.”

Today, air quality in Acadia overall is considered to be in “fair condition.” Haze levels have dropped across the entire Northeast region, and in Acadia, the worst days are not as hazy, and the good days are even clearer. On a clear day in Acadia, its possible to see Katahdin, 150 miles away.

Though visibility is better in Acadia than in most of the Northeastern U.S., it is lower than in the western part of the country. Visibility in Acadia depends on which way the wind blows: visibility is good when air masses come from the north, and worst when trajectories are from the south and southwest. Visibility has improved, largely because of reduced sulfate, but still there are some days when ozone levels are unhealthy for outdoor exercise, when a haze of ammonium sulfate and carbon grays the sky.

Park visitors believe that clean air and scenic views are among the most important attributes worthy of protection in national parks. And working to keep the air clean in national parks means cleaner air, and bluer skies, for everyone.

Please consider supporting our work to share stories of science in Acadia.