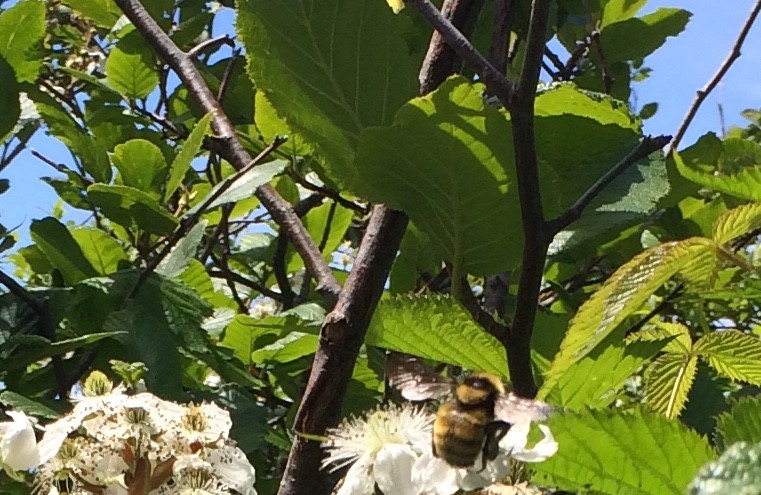 Bumblebees of Acadia National Park, Then and Now

Along the Alder Trail at Schoodic Point, bumblebees zigzag and zoom among the blooming blackberries. The branches bend with their weight; the air hums with their buzz. Black and dark golden yellow, they busy themselves briefly among the white flowers before zooming off down the path. Do they know that it’s National Pollinator Week, an “international celebration of the valuable ecosystem services provided by bees, birds, butterflies, bats, and beetles”? Pollinators are important to the survival of most of the world’s flowering plants, including hundreds of food crops. And their numbers are in decline globally due to destruction of their habitat and pollution.

In Acadia, yellow-banded bumblebee and Ashton cuckoo bumblebee have declined, and the rusty-patched bumble bee is on the Endangered Species List. Others, such as tricolored bumblebee and half-black bumblebee, are still common, while eastern bumblebee has become more common.

The existence of historical data enable identification of these trends.

For more than a quarter century, a small group of naturalists dedicated themselves to documenting the insects of Acadia National Park. Under the leadership of Charles Johnson, curator of insects and mollusks at the Boston Museum of Natural History, and William Procter, an early associate of what is now the Mount Desert Island Biological Laboratory, they eventually documented the presence of 6,578 species of insects and arachnids, including 11 bumblebee species. Many of these specimens are held in the park archives.

When David Manski began working as Chief of Resource Management at Acadia National Park in 1994, and he learned about the Procter collection, he knew it would be valuable to help scientists understand changes in the park landscape over time. Although a wildlife biologist by training, he didn’t know anything about insects and wasn’t really interested in insects, but he supported researchers interested in collecting and documenting insects in Acadia.

In 2004, with assistance from the Maine Entomological Society, Manski initated an annual bioblitz, a rapid survey that engaged volunteers of all ages in a 24-hour “snapshot” of insect diversity on the Schoodic Peninsula.Manski, whose work had become largely administrative and office-bound, became personally involved. “I needed to rekindle my connection to nature and why I got into conservation in the first place,” he recalled.

The 2010 bioblitz found 28 species of bees and eight species of bumblebee (some 16 species are found statewide).

Attention to bees had intensified, with scientists, farmers, and concerned bee-watchers sounding the alarm about declines in pollinator populations.

Manski signed up to participate in a 2011-2013 survey of the distribution of bee species in vulnerable habitats like sand dunes and alpine areas. Acadia was one of 48 national parks participating in the U.S. Geological Survey-led effort. Manski did the sampling himself, collecting bees at Sand Beach and in Bar Harbor. He found six species of bumbebee, including Bombus sandersoni, a relatively uncommon woodland bumblebee that has shown up in the past few years and seems less affected by the declines affecting other bumblebees. And he found out how amazing bumblebees can be.

Of the species documented in Acadia by naturalists in the 20th century, rusty-patched bumblee (Bombus affinis), Ashton cuckoo bumblebee (B. ashtoni), lemon cuckoo bumblebee (B. citrinus) and yellow bumblebee (B. fervidus) were not found by the bioblitzers. Bioblitz volunteers did find the Sanderson bumblebee (B. sandersoni) and more half-black bumblebees (B. vagans), but fewer yellow-banded (B. terricola) and confusing (B. perplexus) bumblebees, patterns that parallel some of the recent shifts in bumblebee populations in eastern North America.

Acadia National Park has contributed archived specimens and observation records to the Maine Bumble Bee Atlas, which recently issued a call for volunteers along the Downeast coast and islands. And Manski, now retired, is converting his Mount Desert Island backyard and fields, once an organic vegetable farm, into an orchard and native pollinator habitat. He installed bee houses, planted native seeds, and fostered a patch of wild milkweed that, when in full bloom, buzzes with bee life.

“If we can have patches of favorite habitat around the park, we can help these animals prevail,” he said. He continues to monitor and photograph bees. “Most people take insects for granted, but when you really look up close, they’re unreal, awe-inspiring.”

Now is the time to look up close.

The greatest diversity and abundance of native bees parallels the warm weather and abundance of flowers in summer. Bumblebees are easy to find. Because they generate their own heat, they are active even on cloudy, rainy days. And they are not picky, visiting blooming berries, apples, sunflowers, beans, roses, and many garden flowers. According to University of Maine Cooperative Extension, bumblebees are “extremely important pollinators of many flowering plants throughout the native ranges with which they co-evolved.”

Though not always easy to identify, it is still worth trying to decipher their yellow-and-black (and sometimes orange or brown) patterns. Some, like the bees along the Alder Trail, move fast from flower to flower, but others linger. Distracted by their pursuit of pollen, they allow for human inspection and inspiration.