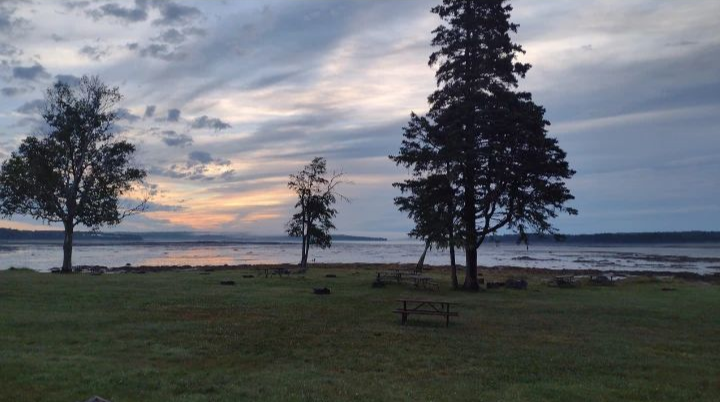 by Jes Hosch, Summer 2022 Intern from University of Minnesota

I was born in Duluth, Minnesota, in a hospital room two blocks from the shore of Lake Superior. Most of my introduction to the outdoors was along this lake, as I almost always could catch a glimpse of the smooth, vast expanse of water as I learned to ski and hike. Even as I moved away, my awe of Superior’s seemingly infinite horizon and my love for its rocky beaches only grew with me. There is a magical quality on the North Shore that no other place seemed to hold: calm nights so still that the lake reflected the moon back a near perfect twin, stormy nights so impressive as to spray your face from a high cliff and tear down the rocky sea pillars that had stood in its wake for thousands of years. Lake Superior will always be part of my definition of home.

My first week here, I sheepishly admitted that the marriage of forest with the Atlantic’s rocky seashores reminded me of Lake Superior. I was worried that comparing a lake to an ocean would be inadequate, but Mara, one of the technicians and a fellow Minnesotan, agreed with me right away. The awe that the Atlantic requires is a close cousin to that of Superior. Though it may be normal to those who grew up with an ocean nearby, I was enthralled by its many moods, hypnotized by the sounds of the buoy bells from my window at night, and amazed by the culture surrounding harvest not just from the deep waters but even from the tidal mudflats.

I soon learned after my arrival at Schoodic Institute that these mudflats would be where I was working to study biodiversity and sediment grain size. The Great Lakes I am familiar with do not have significant changes in water level due to tides, and therefore the dynamics of the intertidal zone were brand new to me.

A mudflat is land of soft sediment that is covered and uncovered by the ocean when the tides rise and fall. This much was obvious, initially. While gathering materials and understanding of the project to come, Isobel, Josh and I walked up to the edge of the mudflat at West Pond and gazed out at it. Josh and I took a tentative step into the squishy muck and immediately changed our minds. I reached down to touch the mud and get an idea of what I was going to be working with. As I explained to Isobel, “It’s just mud. No big deal, right?”

A few weeks later we went to Thompson Island, arriving at 5 a.m. as the tide reached its low point and the sun began to paint the sky orange behind pale blue clouds. We stepped into the mudflat confidently, only to realize as we sunk to mid-calf how soft the sediment was in comparison to the sites we had previously sampled. Within a few hours, Maya developed a rash after getting bitten red by no-see-ums, I had mildly sprained my right ankle, and Isobel had gotten stuck to the point that she had to be dug out of the mud. Confidence shaken, our drive back was spent in quiet misery.

Unfortunately for me, that day at Thompson Island was my last full field day, sidelined by my sprained ankle. Later that week, Erica and Isobel both returned to finish the sampling there, with education fellow Mikayla alongside them, and had a much better experience, returning with spirits restored. Meanwhile, Maya and I had begun sorting through the cores we had collected to see what lived there. Our frustrations had not been futile. Under the microscope, we were captivated to see miniature clams sticking out their siphons, little worms with long gills next to the tentacles on their head, even a tiny amphipod.

A mudflat is a habitat for clams, worms, snails, crabs, and amphipods, eaten by fish when the tide is high and birds when it is low. This became especially clear when we joined a local wormer, Fred Johnson, to learn more about worm harvest. He told us about the ways the mudflats had changed since he began worming, how green crabs were reducing the harvestable worm population–which he demonstrated by throwing one into a bucket with a worm we had dug. He showed us the proper techniques for worm and clam harvesting, plucking two clams from the sediment and shucking one for me, one for himself. As I attempted to eat the clam raw, gulls picked over the distant tracks we had left with our worm hoes.

Two weeks later, I began my journey back to Minnesota at dawn, the purple and orange of the sky reflected by the ocean and the surface of the mudflats we passed reminding me of that difficult day at Thompson Island and a similar sunrise right before we had our worst field day of the season. This time, though, I knew about the dangers and the wonders of mudflats, the creatures that called it home, and the people who relied on them to make their own living. Watching the mudflats go by on the drive out of Schoodic Peninsula, I knew I would miss them. I recognized the bittersweet feeling I often felt when leaving my favorite lake.

A mudflat can be home.