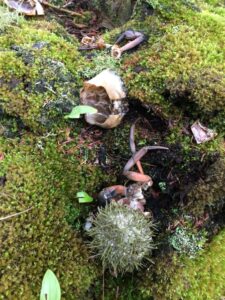 Before we even get to the water, Hannah Webber is asking questions. Along the path through spruce woods, she wonders at the shells of urchins, crabs, and mussels strewn about the moss. She notices bear scat and hears the gulls calling out across the waves. Who left these shells? Who is eating whom? What does it mean for the forest to have such an influx of marine material? What can we learn from the phenology, the seasonal timing, of the shells left on the rocks, in the road, and between the trees? Who else is studying this?

We could stay inside the treeline all day, but we have work to do. Last year, Hannah set up rockweed sampling sites as part of her doctoral research to assess the effects of seaweed harvesting. Of the 23 sites up and down the coast of Maine, some are “controls,” meant to serve as indicators of what would naturally happen to rockweed over the seasons and years. Others are “impact” sites, monitored before and after harvesting.

Once we find each site (based on GPS coordinates, notes, photographs, and Webber’s memory) we put out sponges and absorbent pads which will be weighed to provide a coarse estimate of how much rockweed beds “dry out,” which is important to the environment of many organisms in the intertidal zone.

At each circular plot, along four-meter north-south and east-west transects, we measure rockweed depth, and the length, circumference, and weight of individual rockweeds every half a meter. Weighing involves a modified five-gallon bucket and a temperamental scale.

Small squares within the plot are photographed to measure the growth of barnacles, encrusting films of seaweed and bacteria, and use by mobile invertebrates like limpets, periwinkles, sea stars, and crabs. We see eggs of Littorina obtusata. “Some people say they lay their eggs on rocks. Other people say they only lay their eggs on seaweed. I’ve seen both. Which makes me wonder, is this a geographic thing?” Hannah wondered aloud.

There’s colonies of reddish bryozoans that live on the base of rockweeds, and brown lumpy algae that look like pom poms underwater, both sheltering amphipods (“little beasts,” Hannah calls them). Isopods graze among the fallen fragments. 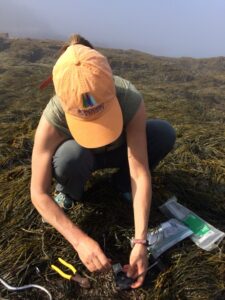 Small instruments that measure temperature and light and water motion every half-hour (what scientists call “loggers”) are attached to the center of each plot, and Hannah connects them to a battered field laptop to download the digits.

An osprey flaps by. A winter wren calls from the mossy woods. Gulls skulk among the low-tide rocks.

Hannah has shared with me before how field work is almost like meditation, because your mind and body are singularly focused on the task at hand. Collecting quality data must be done consistently and without distraction, except of course when an interesting creature saunters across your study site, or a new bird calls from the nearby trees, or a seal appears on the scene. Otherwise, it is all methodical, attentive work.

This concentration, and repeated observation, is what leads to questions. Beyond the big question (how does harvesting affect the intertidal zone?) Hannah has many small questions. How hot does it get in a rockweed bed at low tide? Why does some rockweed get all nubbed and frilly? What does the community look like at high tide? What would we see scuttling between the rockweed holdfasts then? When the tide comes in do the rockweed fronds thrash against the rocks, removing small animals (or are the animals too tough to get removed)? What eats rockweed gametes? Why does rockweed have so many different shapes?

Hannah will sample again in the fall and then again next spring, and then will finally analyze all the data. Hopefully, she will get some answers to her many, many questions. 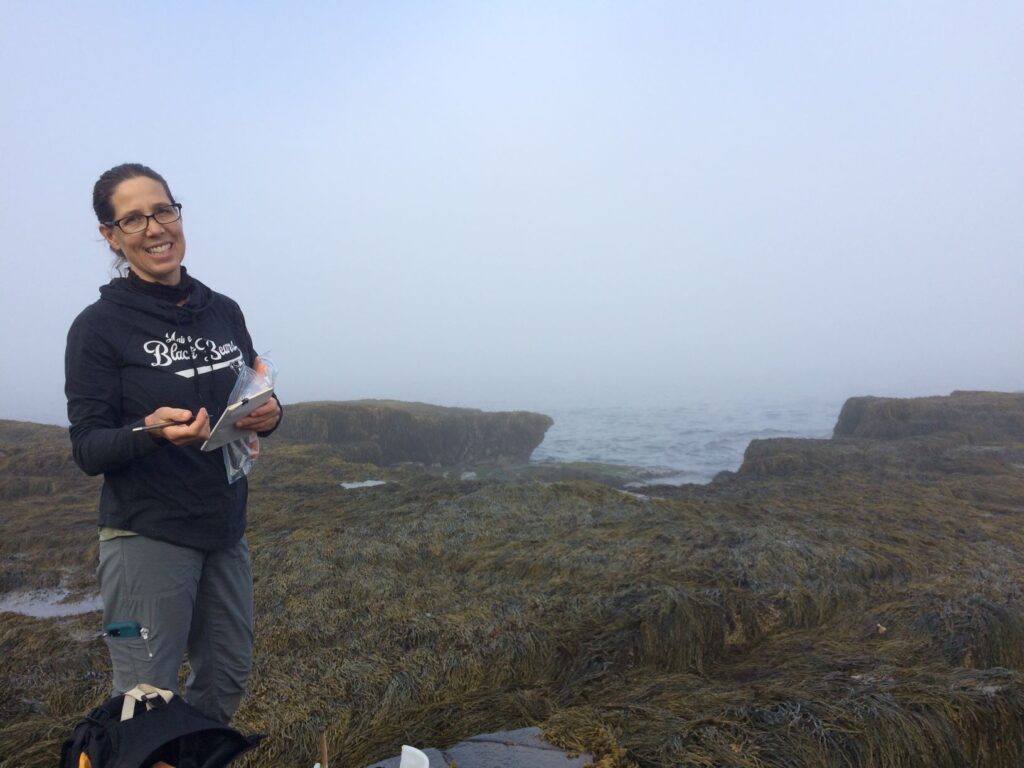