North Lubec, Maine – The sun rose gold and pink through clearing clouds on a late August morning. A crew of ten people made their way from old fields of ripe blackberries and apple trees down a rocky shoreline that curved into a small peninsula of more rock and gravel. They carried square frames of one-inch plastic pipe, measuring tapes and sticks, scales, buckets, pencils, clipboards, cameras. They paused in the shade where trees met the dry upper edge of the beach. From where they stood to the ebbing sea, the shore was covered with rockweed. It even covered the low-hanging branches of the spruce trees, cast there by waves from a recent high tide.

The stringy brown “seaweed” found all along Maine’s rocky intertidal zone is really two species of macroalgae, mostly Ascophyllum (rockweed) with some Fucus (bladderwrack) mixed in. At high tide, rockweed’s branched fronds float and spread, photosynthesizing, producing oxygen. At low tide, they drape across the rocks like shaggy hair. The strands on top dry out, while those underneath hold moisture, sheltering crabs, periwinkles, sea stars, and other animals, creating habitat for both predator and prey. Rockweed is thus an organism and an ecosystem.

Rockweed is also harvested, a resource valued for what it contains: marine minerals, nutrients, and unique chemicals used in food and agricultural products. Those charged with protecting and managing the resource require some knowledge about the total amount or population (or biomass) of rockweed and bladderwrack along a given stretch of coast, and how it might be changing as the Gulf of Maine continues to warm. But how much rockweed is there on the Maine coast? How much of the intertidal is covered by Ascophyllum versus Fucus?

It is not easy to figure out how much rockweed lives in the dynamic intertidal zone. But finding ways to do just that is why Jessica Muhlin of Maine Maritime Academy and Schoodic Institute Marine Ecology Director Hannah Webber, their collaborators, and a crew of students, technicians, and volunteers were out on the hard edge of Cobscook Bay. For the rest of the morning and into the afternoon, in a race with the incoming tide, they planned to spread out along the short stretch of shore, and measure, count, and weigh the rockweed using a transect-and-plot design. 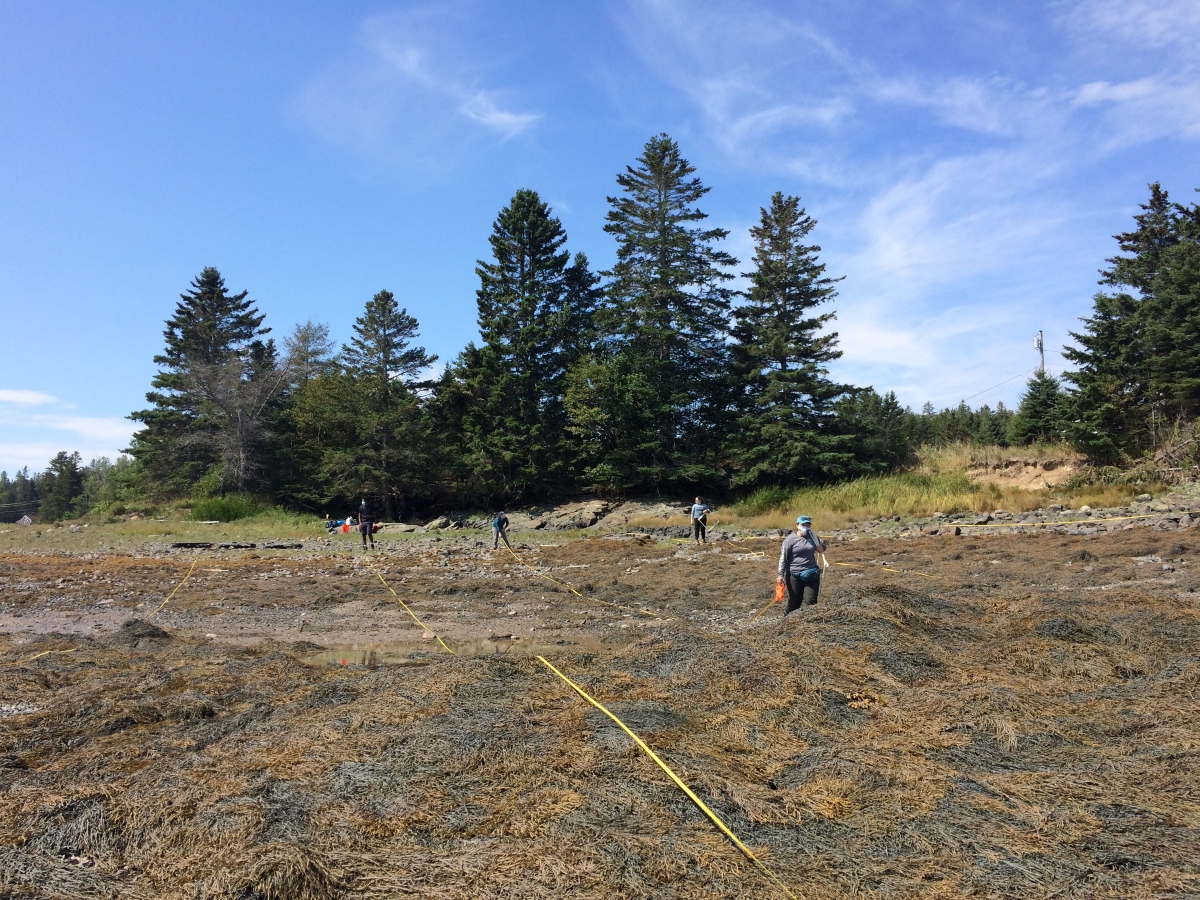 Sampling rockweed by hand this way every half a meter for thousands upon thousands of miles would generate accurate data, but would take a lot of people, time, and money. But there may be another way. To the human eye, the two species of seaweed can be identified by their slightly different textures and colors. Rockweed and bladderwrack have different amounts of pigments such as chlorophyll and carotenoids, which help them photosynthesize (convert energy from the sun into sugars). Because each photosynthesizing species has a unique combination of pigments, each species reflects a unique pattern of wavelengths of light, or spectral “fingerprint.”  Those different spectral fingerprints may hold the key to estimating rockweed along the coast.

For years, scientists have assessed vegetation over large areas, using images collected via airplanes or satellites from thousands of feet in the sky. Using this method won’t quite work as the resolution is too coarse to count or quantify rockweed species. Additionally, satellites don’t always record data during a cloud-free moment at low tide, or at a time that can be synced with ground-truthing. Muhlin and Webber are evaluating an alternative: high-resolution aerial photography and remote imaging from hundreds of feet in the air. So, back in North Lubec, first came the drones.

Rising to 400 feet above the ground, the “Unoccupied Aerial System” (UAS) captured a series of high-resolution “multispectral” images over the intertidal zone within about six minutes—something that would take multiple tide cycles (hours) to complete on the ground. Pilot and collaborator Stefan Claesson, principal scientist of Nearview, LLC, would later download the imagery from the UAS and camera system to accurately map every inch of intertidal habitat not only in the 3 colors of a typical photograph (red, yellow, blue), but also into 10 bands of additional colors of the near infrared spectrum, beyond what is visible by the human eye. (A typical camera captures 3 bands, red, yellow, and blue.) Next, UMaine graduate student Kevaughn Smith flew a much larger drone equipped with “hyperspectral” camera on a larger UAS. This camera breaks down the images into even more colors, 326 bands in the visible and near infrared spectra, to refine the spectral fingerprint of the two seaweeds in even greater detail.

“The larger, more stable platform was needed due the weight of the camera, computer and GPS system, as well as the physical difference in the way the sensor collects data,” explained Peter Nelson, a collaborator who recently joined Schoodic Institute as Forest Ecology Director, bringing his skills in imaging technology and data analysis. “Unlike normal cameras, the imaging spectrometer is a push-broom system, which means the field of view is only a slit. Each ‘picture’ from this camera is one pixel long and very wide. The camera takes these pictures up to 40 times a second as the sensor flies along.”

“We want to know whether this remote sensing technology can distinguish between these two similar species of macroalgae,” said Muhlin. “It is important to be able to accurately estimate the biomass of each species for sound resource management of the commercially-important Ascophyllum, as well as to detect changes in intertidal seaweed composition over time. Published reports suggest that as the climate warms, these species may respond differently—there may be an increase in Fucus and a decrease in Ascophyllum.”

This fall, Catherine Mitchell, a collaborator from Bigelow Laboratory for Ocean Sciences, and Peter Nelson will develop a spectral library for cataloging the different wavelengths of light reflected by rockweed, bladderwrack, and surfaces that the seaweeds attach to, such as granite bedrock, cobble, or mud. By making measurements of rockweed and bladderwrack within the laboratory, they will detect all the characteristic wavelengths and determine how water content and mixtures of rockweed and bladderwrack will effect the overall spectral fingerprint. The drone-collected images will then be compared to the spectral library data to determine how easily the machines can distinguish one species from another.

After flying the instruments along a rectangular grid, the drones soaring and buzzing overhead like some giant robotic insect, the pilots carefully brought them back to earth. To confirm the library and correlate with the drone images, technician Hayes Henderson took spectral measurements at marked locations along the aerial photography route. Nelson will take these measurements and match them with the reflectance profiles in the images, using machine learning software he wrote with his students (and has made available for free online).

“Peter was not even a glimmer in the project team’s eyes when we submitted the proposal, but his skill set is exactly what the team needed,” said Webber. Nelson and Kevaughn Smith, who worked with Peter while an undergraduate student at University of Maine Fort Kent, immediately joined the project. On the August day in Cobscook Bay, Kevaughn tended to the super drone and helped make sure the sampling locations aligned with the aerial imagery. “This sampling design will allow us to see how easily the drone imaging is able to discriminate between rockweed and bladderwrack, and at what scale—Millimeters? Centimeters? Meters?” said Webber. “And if we can then extend the distinction to the whole coast, then we can get those much-needed estimates of rockweed and bladderwrack.”

The rest of the volunteers then spread out to the same grid to collect data on rockweed species, abundance, length, and weight. Compared to the big, “high tech” remote sampling by the drones, the field work was “low tech,” and intimate. The researchers are anxious to learn whether the on-the-ground measurements can be combined with the drone-captured data to estimate rockweed biomass.

The project is supported with grants from the Maine Economic Improvement Fund and Bigelow Laboratory’s Center for Seafood Solutions. With additional support from the Broad Reach Fund, Muhlin and Webber hope to determine if the on-the-ground measurements can be made by citizen scientists. 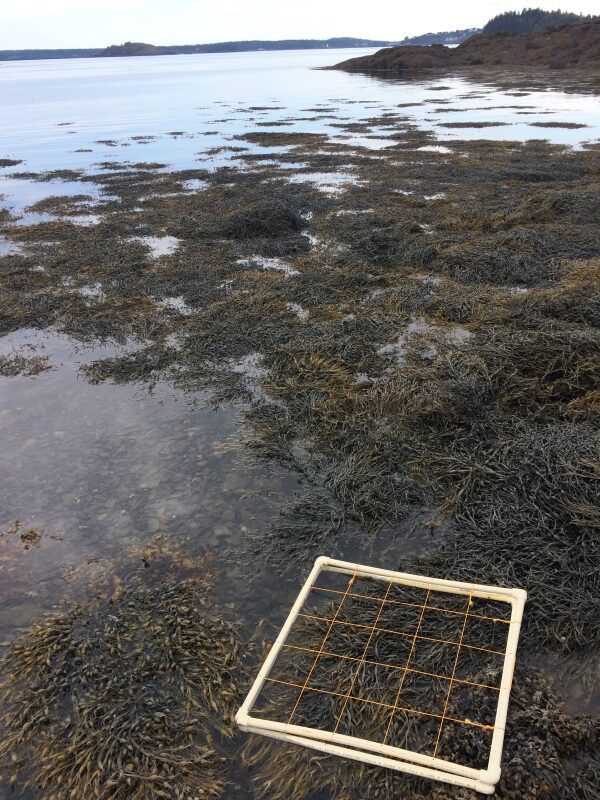