Learning from the tundra

The land points out towards the open ocean. As I walk farther out, I become increasingly surrounded by waves and wind. The trail begins in the tight quarters of spruce stands, where only a narrow path allows me to wade through the waist-high bushes that inhabit the space between trees. These bayberry bushes can slow my travel with nagging outstretched arms. But just as the thicket seems to close in for good, the landscape opens up. The sturdy spruce fade away, and soon even the stunted shrubs cannot withstand the exposure at the end of the island. Here, the tundra plants find their home, free from tall plants with big leaves that steal away the sun and space from the tough little ones.

The last two summers, I’ve been a field scientist in tundra systems, from the alpine tundra of Pikes Peak to the arctic tundra of Alaska. I’ve grown a love for the world of miniature plants. They create a base of life at the extremities of the planet. To join them, one has to sit, slow down, and look closely. It’s easy to get sucked into a timeless place, just me and those cutie plants, as others may wonder, “Why is that kid staring at the ground for so long?”

Coming to Schoodic from Colorado, I was expecting the “sea to trees” of Acadia. I’d get a taste of the boreal, but to see any form of tundra, I thought I would have to travel far north to find the expansive treeless landscape that I cherish. I’m fascinated with the parallel relationship that elevation and altitude have on ecosystem type. It makes sense: as you walk up a mountain or towards the poles it gets colder and the plants change. I had no idea there would be another parallel to be found in Acadia.

The way that plant communities change near Acadia’s seashore show the same transitions seen at latitude and elevation gradients. But in this case, proximity to exposed coastline is the driving force of change. Along the rugged coast of the Schoodic Peninsula, the comparison is realized. The places where life hangs above the surf on granite cliffs or hunkers down on storm- and sun-bashed islands take on the appearance of, and genuinely are, tundra.

Among the numerous low lying plants, I saw a familiar face, Empetrum nigrum, the black crowberry. It had been so long! I hadn’t seen Empetrum since last summer, far from the ocean, dead smack in the middle of Alaska, 4,000 miles away. I’ve studied this plant before and we’ve spent many nightless days in each other’s company. One perk of living on a big sphere is that closer to the poles, the other side of the world isn’t nearly as far away.

Arctic species often have distributions that look like a thick squiggly headband wrapped around the top of the globe. Acadia is unique in that a collection of other boreal and arctic species reside here as well. Species followed as the ice sheets melted after the last glacial maximum. But some were a little stubborn and decided Acadia would make a fitting home. The oceanside living maintains a cool climate, so species that would typically be found farther north can live at a latitude that otherwise would not suit them.

Empetrum slowly spills out of cracks in the pale granite where organic matter has stayed still long enough for soil to accumulate. Then it sprawls onto bare rock, a frontier for vascular plants. The plant’s appendages twist around each other creating a dense matrix of thin woody stems. This network of vegetation perpetuates the formation of soil and provides physical shelter for other small plants.

It’s not easy for plants to grow on Acadia’s rocky headlands. In these conditions, plants are chronically stressed for water and nutrients are scarce, too. In many cases, as environmental conditions become more stressful for plant communities, the effects of facilitation outweigh those of competition. While tundra plant communities still compete for space and limiting resources, the power of facilitation gives life. Tundra plants provide shade, shelter from drying out, protection from disturbances and grazing, and enhanced soil and nutrients. In turn, survivorship and productivity are greater for those plants nestled alongside other friends compared to plants living all alone.

Within our human communities we also see a mix of positive and negative interactions. Sometimes it may feel that the world and the people around us are just in it for themselves. But more often than not, the kindness and generosity of others improves our lives. A friend lends a hand so that you can get back on your feet, and now you can give your helping hand to someone else. Before you know it, we are all on our feet able to take on any challenge together as a community. Society is now experiencing the swirling confusion of a great storm that is creating increasingly stressful conditions. So that life can continue to flourish, we must now reach out and facilitate each other’s growth just like the plants on the bold coast of Acadia. 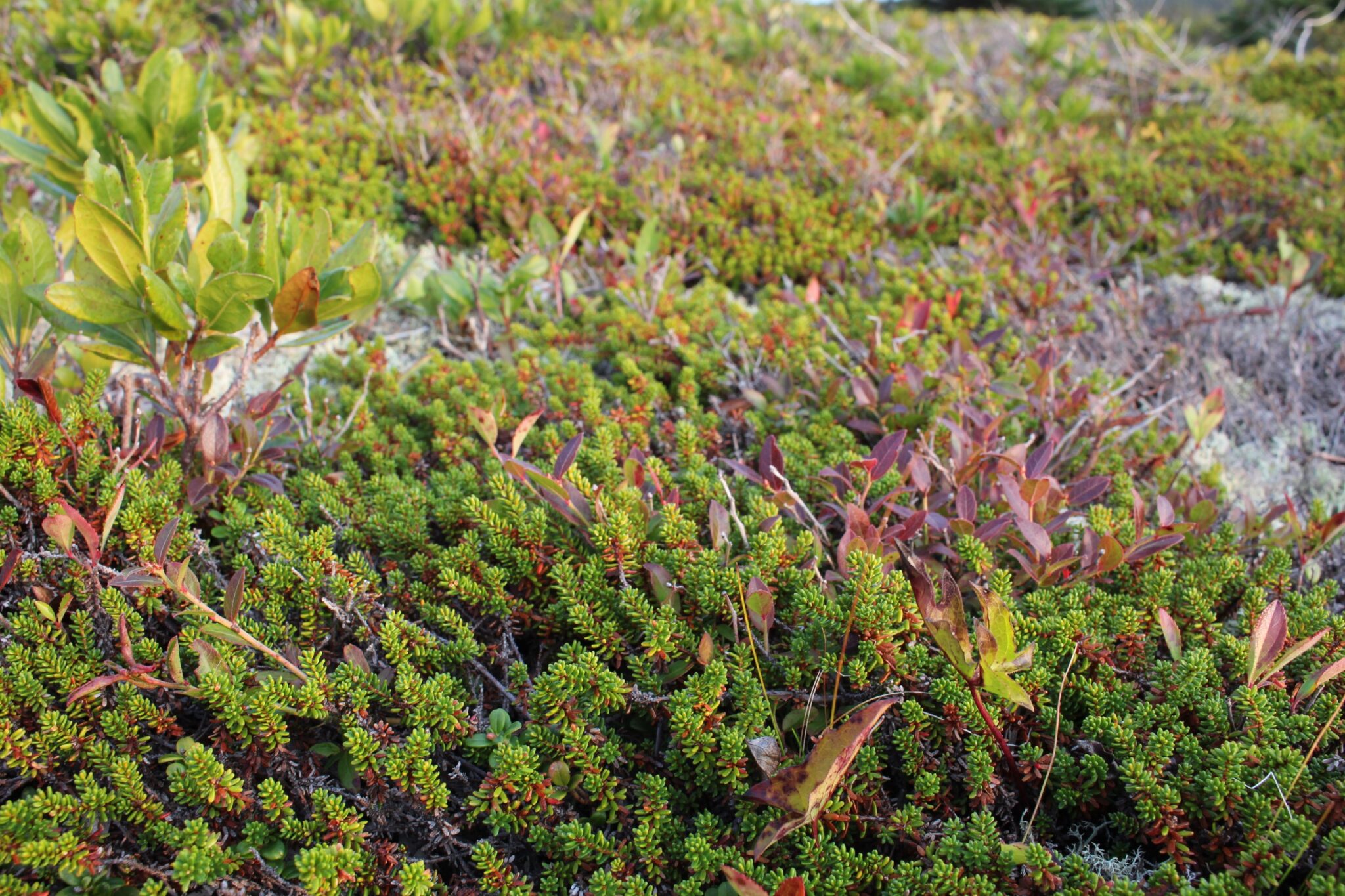 Like this story and want to support early career scientists at Schoodic? Consider making a donation.