This small frog is tan or brown, or gray (color changes depending on surroundings) but always with an X-shaped pattern across the back. They can climb trees but usually don’t; look for them hopping across the forest floor – or among the rock pools at Schoodic Point. They are usually nocturnal, feeding on beetles, ants, snails, spiders, and other small invertebrates. They, in turn, are eaten by snakes, skunks, and even larger frogs.

The earliest iNaturalist record of Spring Peeper on the Schoodic Peninsula is May 2; the latest observation is October 21. They are present throughout the months in between.

iNaturalist’s emphasis on visual observations/photographs has probably skewed the representation of this species. Surely, the Spring Peeper call has been heard before May—one was reported on March 19 of this year on Mount Desert Island. The timing of their calls could be an indicator of warming temperatures. A study conducted in New York found that the Spring Peeper chorus was occurring earlier.

For it is sound that most often announces the presence of Spring Peepers and other frogs.

As Acadia National Park Ranger-Naturalist Arthur Stupka wrote in 1933, “nothing can compare with this ancient chatter of the wet-skinned dwellers of the marshes.”

It is possible to upload sounds to iNaturalist – keep this in mind and have a sound recording app ready next spring as the frogs emerge from their winter rest and begin calling from wetlands and vernal pools. Until then, continue to post any images of this Schoodic amphibian, and follow the Schoodic Signals project. 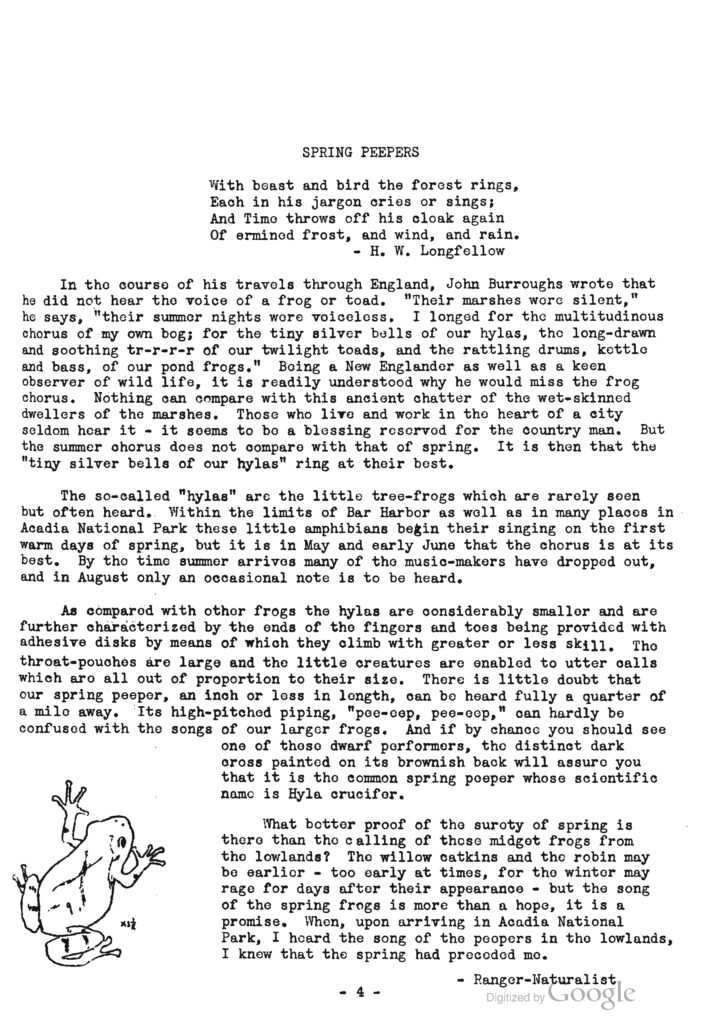