Over the next six months, this series will feature stories of scientists working in Acadia to answer these questions. Welcome to the Understory.

Her early leaf’s a flower, but only so an hour…
– Robert Frost

Trees make up a forest, but the forest is more than trees. Take, for example, the plants that never leave the ground level. Ladyslippers, trilliums, bloodroot, false solomon’s seal, and other wildflowers grow in deciduous and mixed woodlands. Many of these plants flower early in the season—their moment in the sun comes as winter’s last snow melts away, the soil warms, and the forest is awash with light. With energy from the sun turned to carbon, flowers become fruits, plants grow and spread, ensuring survival for the next year. As the air temperature warms, the days lengthen, and the trees leaf out, the canopy closes in. Some of the understory flowering plants go dormant in the shade. The ones called “spring ephemerals” disappear completely while others retain their leaves.

So what does it mean for the wildflowers that spring’s warm temperatures are arriving earlier? (Though maybe not this year!) Researchers J. Mason Heberling of Carnegie Museum of Natural History and Second Century Stewardship Fellow Caitlin McDonough MacKenzie wondered if the wildflowers were blooming earlier, and how this compared with the “leaf out” of the overstory tree canopy. What was happening in the narrow window of time when wildflowers bask in the life-giving light of the sun? Other studies had shown that a plant’s ability to follow spring temperatures and advance flowering in warmer years is correlated with survival of their population, while plants that don’t track spring temperatures are more likely to decline in abundance. “We knew that flowering had shifted and was responsive to spring temperatures, and earlier leaf-out was well-documented, but we didn’t know how those shifts compared to each other,” said McDonough MacKenzie.

By monitoring spring flowering understory plants in the modern forest and comparing the data to historical records, like those collected by Henry David Thoreau in Concord, Massachusetts, they found that tree leaves are emerging earlier. Flowering time also has shifted earlier, just not as dramatically, so the high-light between understory flowering and overstory leaf out has shrunk, a fleeting moment made even more fleeting.

A different analysis of historic data for Acadia National Park showed that some of these same wildflowers have declined in abundance since the 1890s, when Boston lawyer Edward Rand and naturalist-businessman John Redfield were compiling the Flora of Mt. Desert Island, Maine.

Orchids, wood lily, and violets have disappeared completely from some areas—does the “excessive flower picking” that so worried young Edward Rand explain the loss? More likely, said McDonough MacKenzie, the cause is a combination of habitat loss, climate change, damage from deer, and pollution.

The spring bloom continues in the evergreen forest that covers most of Acadia, with hardy shrubs like rhodora and blueberry, and groundcovers like bunchberry and trailing arbutus. Those that grow in locations that warm up faster in the spring bloom earlier than those in shadier or cooler spots, according to another recent study by McDonough MacKenzie and colleagues.

“It’s not as simple as the bottom of the mountain leafs out, and then spring evenly spreads uphill,” she said. “Sometimes high elevation sites or northern-facing sites have warmer temperatures. Wherever they are in any given year, the warmest sites are most likely to see the first leaf out and flowering.”

Out of nine common understory plants that McDonough MacKenzie studied in depth, only one species, starflower, did not seem to respond to earlier spring, instead blooming at the same time across the island, regardless of temperature.

Perhaps it is the starflower, then, that best represents how a changing climate is stealing the beauty of the world, flower by flower, hour by hour. 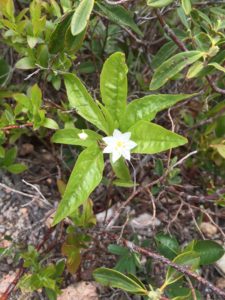