Part 2. Seedlings on the Edge

Acadia National Park is mostly forest. Some three dozen different kinds of trees grow in the park. Red spruce, fir, hemlock, and pine fill the mountainsides while white spruce thrives along the fog-drenched shoreline. There are stream valleys of birch and maple, groves of oak and beech, swamps of cedar, bogs of tamarack. The trees have long been a source of inspiration and sustenance, as well as a subject of interest for scientists.

In 1916, Barrington Moore began studies of Acadia’s forests. Moore graduated from Yale with a master’s degree in forestry in 1908, spent a year studying forestry in Europe and Asia, and worked for the U.S. government in New Mexico and Washington, developing plans for forest management and methods of mapping and estimating timber lands. He resigned in 1914 to devote all his time to forest research.

In the 1920s, he and Norman Taylor of the Brooklyn Botanic Garden studied temperature and moisture in Bar Harbor stands of red oak, white pine, pitch pine, and red spruce. Their published findings included the first map of vegetation in Acadia.

They concluded that “when all else around it becomes artificial,” Acadia will remain “the one spot on which the forces of nature will have an opportunity of working out the ultimate destiny of the vegetation and wild life without human interference.”

It is clear from this quote that Moore and Taylor did not anticipate human interference with the global climate system, which is now increasing temperatures on land and water in Acadia at unprecedented rates. They calculated the average annual temperature in Acadia as 44 F; today it is around 46 F. Average annual precipitation then was 48.3 inches, today it is about 55 inches. These shifts may not seem so big, but they are enough to make a difference in the forest.

Trees generally grow faster in warmer climates, and temperature also affects trees indirectly via drought, pests, disease, and soil chemistry. To understand the forests of the future, scientists working today try to forecast where trees will grow based on their current locations and growing conditions. 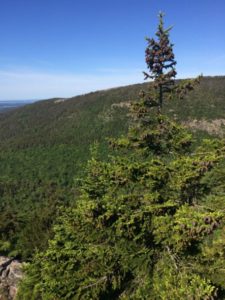 The cool, humid spruce-fir forest, the dominant forest of Acadia, is the most vulnerable. The trees most likely to lose habitat are those that grow in cooler areas: balsam fir, spruce, tamarack, cedar, hemlock, paper and yellow birch, striped maple, and beech.

“Balsam fir has been showing signs of decline related to insect pests and competition with other trees,” said Schoodic Institute Forest Ecology Program Director Nicholas Fisichelli. “On the other hand, red spruce is doing really well right now, including within Acadia, in part because of improved air quality that reduced acid rain. It is the most abundant overstory tree and most abundant sapling too. This is the paradox of red spruce—doing great right now, but projected to really decline in the near future. Will this happen? Is red spruce going to decline? Or is it more adaptable to emerging conditions than we give it credit for?”’

These are the questions Fisichelli is attempting to answer with tree test beds in Acadia, campus gardens across the state, and plantings on conservation land in coastal Maine. The experiments are designed to mimic forest edges and clearings, the competitive space where seeds from warm-adapted trees might mix with existing seedlings of trees adapted to Maine’s cold climate. These “local ecotonal boundaries” are where forest change will be most detectable.

Acadia National Park, because of its latitude, varied topography, and location near the ocean, has an exceptional amount of ecotonal boundary. According to the National Park Service, Acadia is within a “transition zone” between warm deciduous and cool coniferous forests, and as a result, hosts diverse plant species and communities currently at the edge of their geographic range. Boreal species like jack pine and white spruce grow alongside southerly species like pitch pine, bear oak, and dogwood.

And so alongside fir and spruce, Fisichelli has planted other local trees (red maple, white pine, oaks, black cherry) as well as trees that grow well south of Acadia but are predicted to expand north (yellow poplar, Virginia pine, chestnut oak).

“Seeds and seedlings are monitored weekly to capture birth, growth, leaf out, and death,” said Fisichelli. “Just within Acadia, the trees have responded to differences in local microclimates. The hot dry summers of the past two years have parched the small seedlings and resulted in many stems dying from drought stress at low elevation areas away from the coast. The windy and harsh conditions on exposed summit areas are best endured by disturbance-tolerant jack and pitch pines. The moist and cool conditions on the Schoodic Peninsula have encouraged high germination of all trees in the study.”

Back in the 1920s, Barrington Moore and Norman Taylor also transplanted seedlings of spruce, fir, and pine into experimental growth plots with different kinds of soil, and studied their growth. “Each species reproduces only within a certain range of environmental conditions,” they wrote. And Acadia, being located between southern and northern zones, was the perfect place to study how trees spread from one area to another. Moore promoted the value of Acadia and other parks for science, as places to observe nature unimpaired, writing in 1921:

“Mount Desert Island exhibits features which are of unusual significance to the student of natural history…From the forestry point of view I can state that on no area of this size have I seen growing together forests representing such different conditions and consequently with such different requirements. Our knowledge of the requirements of different forests for soil, moisture, climate, etc. is very inadequate, and the diversity which we have on Mt. Desert island offers unusual opportunity for adding to this all important knowledge. Scientists all over America are urging the preservation of natural areas for scientific study. In research on distribution, on the influence of environment upon plants and animals, and on adaptation, it is essential to have areas on which the flora and fauna can be found undisturbed by outside agencies. The creation of the [Acadia] National Park on an island of such great interest as Mount Desert Island is, therefore, of the utmost importance to science.”

Today, national park and other areas where plants, animals, land, and water are preserved remain places to observe nature. “Parks provide two critical components in our response to climate change,” said Fisichelli. “They offer the space and the time for species to adapt to shifting conditions.” Shifting conditions that know no boundaries, affecting even the tiniest seedling emerging from the forest floor. 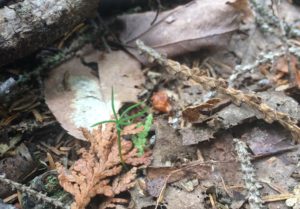