What’s going on with the cardinals?

Recently a summer resident of Winter Harbor wondered if something might be happening with the local cardinal population. “My family has summered in Winter Harbor for the past 18 years, and cardinals have been present every summer—until this year. What is going on?”

Nearly everyone can identify a male northern cardinal, easily recognizable with its brilliant red-body, upright crest, black face, and large seed-eating red bill. The female has many of the same features, except the overall color is a warm brown, which makes her look slightly smaller. The cardinal’s song is also quite distinguished as a loud repeated series of sharp noted single syllables such as, “cheer, cheer, cheer” or a double-syllabled, “birdie, birdie, birdie.” Both male and female birds sing. They are among the first bird species to be heard in late winter and brighten any neighborhood in early spring, and throughout the rest of the year.

The species is relatively new to the state of Maine, their arrival aided by backyard bird feeding. According to Birds of Maine, the most recent authoritative book of Maine’s diverse bird life in more than seven decades, verification of nesting cardinals occurred in 1969, in southern Maine. Locally, the species was first glimpsed on Mount Desert Island in 1960 and then not reported again until 1970. In Winter Harbor the first confirmed report was in the winter of 1974.  However, the first verified nesting was not until 2010.

Inspired by the summer resident’s concern, I examined iNaturalist and eBird records of cardinal observation dates in Winter Harbor and the Schoodic Peninsula. There is just one iNaturalist observation of the Northern Cardinal (Cardinalis cardinalis) from within the town of Winter Harbor. And that was in January 2016.

eBird records, on the other hand, are far more numerous. To date, there are 61 observation dates of cardinals, equally distributed throughout all four seasons. The first report is from 2005. Remarkably, this timeline dates back 18 years, just as the Winter Harbor summer resident asserted in her message to me.

I can only answer speculatively about “what’s going on” with Winter Harbor cardinals. It is likely that during the 18 consecutive years of observation, the observed cardinals were not the exact same birds. The average cardinal rarely lives beyond six years, and in one study the majority did not live more than three.  However, consistent presence over 18 years indicates that the habitat remains enticing to the species. In this case, the sudden absence of cardinals is likely due to the presence of a neighborhood predator. Highest on the suspect list – as is the case in most neighborhood settings – are cats and Cooper’s hawks. 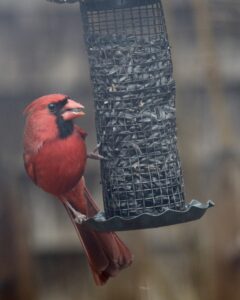