What’s happening on the clam flats?

by Bill Zoellick and Sophie Chivers

On Sunday, June 6, fifty people came down to the clam flat at the top of Prospect Harbor to learn more about what is going on, other than clam harvesting, when they see a group of people out on the mud at low tide with nets, buckets, boxes, and other gear. People from the neighborhood were joined by folks from elsewhere in Gouldsboro as well as people who drove from Sullivan, Franklin, and other communities. They learned that soft-shell clams are under increasing pressure from predatory green crabs that now survive the winters in greater numbers because of warming temperatures. They also learned that in Gouldsboro, like some other communities, the shellfish committee places nets over “clam seed” (small, one-year-old clams) to protect the young clams from the crabs. The tide was out that afternoon, which meant that visitors could have a look at the nets and at the clam holes underneath the nets that the clams use when they extend their siphons up into the water for feeding. 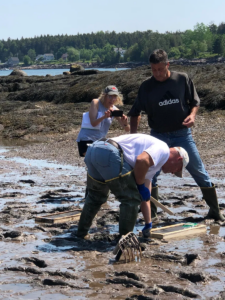 Shellfish committee members Wayne Bishko and David Deniger placed a recruitment box into the mud and secure it with stakes. The recruitment box — sometimes called a “Beal Box” after Dr. Brian Beal of Downeast Institute, who came up with the design — is a small (1 x 2 feet by about 2-inches high) wooden box with tough plastic screen material on each face. They are placed on the flats in the spring when clams are spawning. The idea is that, as newly hatched clams settle out of the water column, some will end up in the box where they will grow during the summer. (Very young clams can easily fit through the screening.) By placing recruitment boxes in different bays and coves, the town is able to gather data about where new clam populations are most plentiful and about clam growth rate at different locations.

The guests heard from the core team including Sarah Hooper, Education Specialist at Schoodic Institute; Mike Pinkham, the local shellfish warden; and Bill Zoellick, former Research Education Director at Schoodic Institute, about the progress and purpose of the project. Some other specialists and collaborators (the all-stars of shellfish work) also came along to share their knowledge. These folks included Heidi Leighton, the area biologist from the Department of Marine Resources; Kyle Pepperman and Brian Beal from Downeast Institute; and several local clammers who brought expertise and deep knowledge of the mudflats and the challenges they face.

We walked the community around the mudflats discussing the ecosystem. Heidi showed the difference between male and female green crabs. We also discussed the details of the shellfish hatchery project: how it will be done, who will do it, the impacts to the local area, and how everyone can work together to make it a project for and by them.