Research in Acadia: 2019 Year in Review

by Emma Albee and Abe Miller-Rushing

Acadia National Park hosts a vibrant and growing research community. In 2019, 175 researchers worked on 80 projects in the park and published 30 scientific papers describing research in Acadia. Many members of the public participated in the research, and scores of park interpreters and partners told stories of science and scientists. Research, storytelling, and expertise in both are critical to preserving Acadia’s natural and cultural resources and providing educational and inspiring experiences for park visitors.

Research topics vary, from studies of wildlife to freshwater lakes and streams to the rocky shore, and take place across the park, including Mount Desert Island, the Schoodic peninsula, Isle au Haut, and some of the outer islands.

Schoodic Institute and National Park Service are committed to strengthening and facilitating connections within this research community. Since 2016, the Second Century Stewardship program has funded nine fellows to do critical research in Acadia; three more fellows will be awarded in 2020. And Schoodic Institute, National Park Service, and other partners collaborated to hold science-related workshops, talks, and the annual Acadia Science Symposium.

Here are three examples of studies that took place in Acadia National Park in 2019:

Ticks and public health
Researchers at the University of Maine—led by Sandra De Urioste-Stone and Allison Gardner—are investigating visitor perceptions of health risks related to ticks and Lyme disease. Acadia National Park is a hotspot for ticks in the region and tick-borne diseases have become a serious public health threat in the park. The research team is interviewing visitors to Acadia to see if they may change their travel behavior because of ticks and Lyme disease concerns, and to gain insights that might help managers encourage visitors to protect themselves from tick bites. The team asks visitors questions like: How do you protect yourself from ticks? How concerned are you about tick-borne diseases? And how would you remove a tick if you found one embedded on yourself? This project is building on a Second Century Stewardship project by Allison Gardner investigating the ecology of tick-borne diseases in Acadia. “Our team has talked with more than 2,000 park visitors about their concerns, practices to prevent exposure to tick bites, and places that they have visited within Acadia. We hope results from this research will be useful to inform visitor management and education strategies that target the needs and practices of different visitor groups,” said De Urioste-Stone. 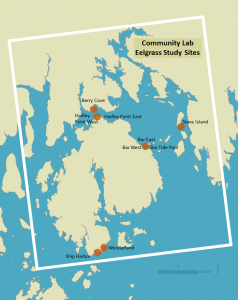 A team from the Mount Desert Island Biological Laboratory, led by Anna Farrell and Jane Disney, is studying changes in eelgrass populations on the seabed around Mount Desert Island. Eelgrass grows in shallow marine areas, usually just below the intertidal, and provides essential fish habitat, helps with sediment and shoreline stabilization, and stores a lot of carbon. In 2013, eelgrass populations crashed suddenly and dramatically across several bays and coves on the coast of Maine, including areas around Mount Desert Island. This loss could lead to reduced commercial and recreational fish harvest, increased shoreline erosion, and reduced ability to mitigate impacts of climate change. Between 2018 and 2019, eelgrass populations on Mount Desert Island grew at Ship Harbor and Hadley Point but declined at Wonderland and Bar Island. “We were surprised to see the declines in eelgrass at Wonderland, after they had been growing over the past few years,” said Farrell (pictured at the top of this post). “We’re hopeful that they won’t experience the same sustained declines that we’ve seen in the inner Frenchman Bay.” The team intends to continue mapping and advocating for the protection of eelgrass habitat.

Discovery of an invasive crab new to Acadia 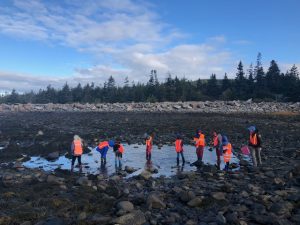 Park and Schoodic Institute staff are engaging interns, volunteers, and students to help document and study biodiversity in the intertidal zone. The intertidal may be the fastest-changing ecosystem in Acadia National Park—facing changes in water temperature, storms, sea level, ocean acidification, invasive species, and more. In September 2019, middle school students participating in the Schoodic Education Adventure—a three-day residential environmental education program run by the National Park Service, Schoodic Institute, and Friends of Acadia—were among the first to identify Asian shore crabs in the intertidal zone in Acadia National Park. Schoodic Institute interns and Earthwatch volunteers also found the crabs in the parks intertidal. This invasive crab, which has already been found along the coast of Maine and neighboring states and provinces, can disrupt ecosystems and food webs, especially fish, seagrasses, shellfish, native crabs, and other marine invertebrates. “Although unfortunate that the presence of a new invasive species was found in Acadia National Park, it’s very exciting that this discovery was made by middle school-aged citizen scientists participating in the Schoodic Education and Education program. It validates the idea that people of all ages and backgrounds are contributing to science in the park,” said Alexa Pezzano, education specialist with the National Park Service. Continued citizen science monitoring of the intertidal will help show the spread of the crabs and other changes in the intertidal, and will inform decisions about how best to manage this critical ecosystem.

Learn more about research in Acadia.