Consider what the Earth would be without its deep masses of sombre forest, its rich luxuriant woodlands, and its copses musical with the songs of birds. – Edward Rand, 1881

In the 1880s, Edward Rand, a member of a student naturalist club called the Champlain Society, described how logging and fire threatened the spruce-fir forests of Western Mountain. Rand spent his childhood and young adult summers on the island, walking through the woods in his pursuit of new plant species during a period of rapid tourism development. He knew where forests had already been cleared for timber and construction of summer cottages and inns, and he knew where the big trees still stood.

“What the island was in those early days of its full beauty must be far beyond the conjecture of the tourist of the present time. Some idea of these mountain woods may still be gained by visiting the western peak of Western Mountain, the most beautiful mountain on the island,” he wrote in 1889. Though he imagined a “forest primeval,” the woods in fact had been used by and altered by humans for thousands of years. 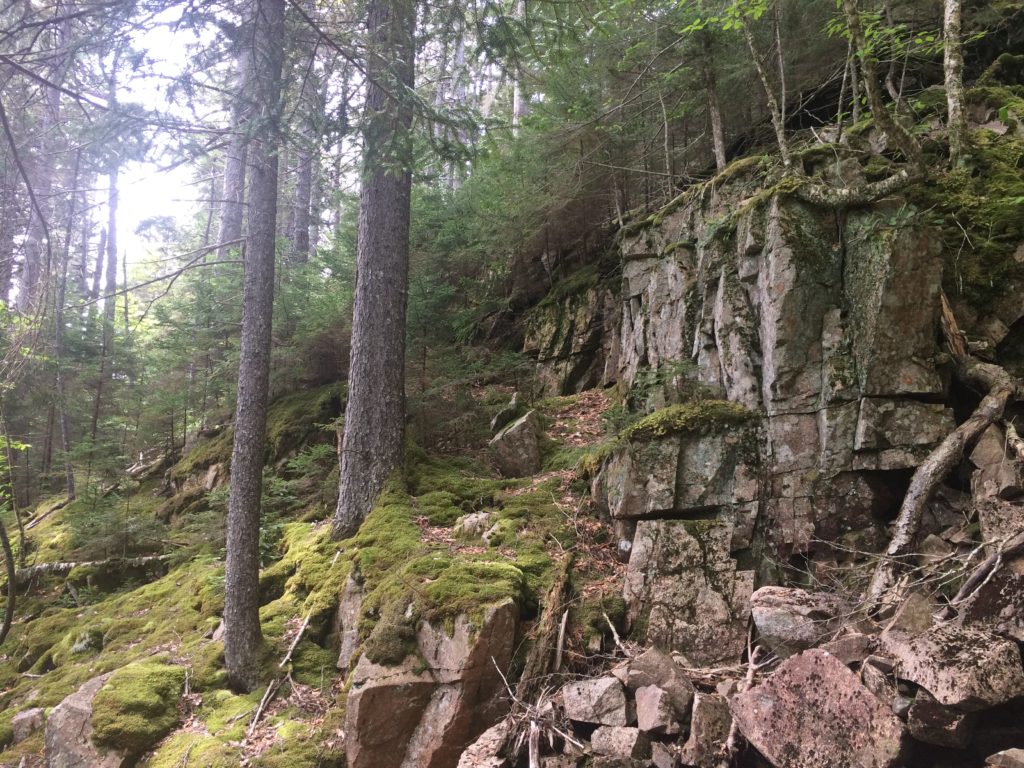 Today on Western Mountain, 150-year old spruces shade the Sluiceway Trail all the way to the Notch between Bernard and Mansell peaks. Elsewhere, large trees admired by Rand survive in Maple Spring Gorge and Beech Mountain and the valley of Little Hunters Brook. The oldest forests are on hillsides too steep to log or along smaller lakes and streams. They provide a rare glimpse into what Acadia’s forests would be without extensive and repeated cutting, clearing, and burning. What the forest, left to its own devices, wants to be. 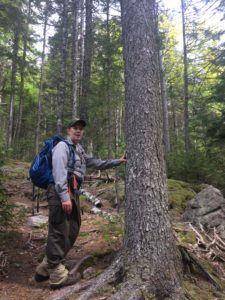 Like Rand, Kate Miller knows where the old trees still stand. A plant ecologist with the National Park Service Northeast Temperate Network, Miller supervises crews of scientists who monitor forest change at 176 sites in Acadia and another 544 sites at parks throughout the Northeast all the way to Virginia. Miller began working in Acadia as a seasonal technician in 2006, and she studied Acadia forests as part of her Ph.D. at the University of Maine.

Miller built upon the work of UMaine ecologist Ron Davis, who studied the spruce-fir forests of the Maine coast from 1958-60, and compared the protected forests of Acadia National Park to surrounding forests, which have been logged multiple times.

Turns out, some of Acadia’s forests are very old, and very different. What are the clues to an old forest? I followed Kate Miller into the woods to find out.

As we started walking along the Sluiceway Trail up Western Mountain, the trees were all about the same size and skinny, the forest floor was mostly leaf litter, and there wasn’t a lot happening in the understory. Kind of boring. But about halfway up the trail, the forest began to look different. The trees became more spread out. There were some really big, tall spruce, but mostly trees of all different sizes and ages. Saplings scrapped for sunlight in the shade of the elders, growing, feeding each other with their roots. New green growth everywhere: soft, spiky, feathery, and haircap moss covered the ground, and stubbly moss ornamented tree trunks. 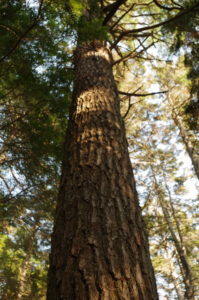 It takes time for a forest to develop such structure. Red spruce can live as long as 350 years, but for most their lifespan is cut short by storms, wind, lightning, or fire. They fall, and sunshine pours through the opening in the canopy. The trees left standing then have more room and less competition for below-ground nutrients, and they shoot up taller, nearly doubling in height from 30-45 feet to 65 feet–this is a unique characteristic of spruce-fir forests described by Davis. “So if you see really tall spruce, you know it’s probably a really old forest,” said Miller.

In “even-aged” stands, such as those growing after a clearcut, the trees are all the same size and form a dense canopy. But there on Western Mountain, beneath a patchy ceiling of cone and cloud, seedlings and saplings crowded the understory. A beam of sunlight illuminated the flowery spikes of mountain maple in the distance, and the rambling song of a winter wren trickled down from somewhere high above.

As Kate Miller described for me how she evaluates Acadia’s forests, she also shared the joy and wonder she feels in the landscape. She had always wanted to work outside, but she didn’t know she could make a living studying plants until, as a college student, she took a class and later conducted research in the diverse hardwood forests of northern Wisconsin. The lush understory was filled with bloodroot, Dutchman’s breeches, spring beauties, maidenhair ferns, trilliums, and abundant sugar maple seedlings. She’s been chasing those really rich forests ever since.

Many scientists have a lasting imprint of the places where they first experienced and learned about nature. For Miller, who has seen the effects of a rapidly changing environment in many parks, protecting Acadia’s forests can help ensure that there will be opportunities for future generations of scientists to have such experiences.

One current student, Maik Werning, is looking at Acadia’s old forests more closely. A graduate student from Germany based at Schoodic Institute this summer, Werning is working with advisors Dominik Seidel of the University of Goettingen and Nicholas Fisichelli of Schoodic Institute to study forest structure: the distribution and abundance of trees and other vegetation in the overstory, understory, and ground layer of the forest. Structure is related to forest growth and trees’ ability to regulate climate and recycle nutrients. He is using three-dimensional laser scanning to compare the structure of hardwood, evergreen, and mixed forests in Acadia.  The technique generates more information than traditional measures of the number and arrangement of trees of different sizes and heights. Each scan provides, in a single three-dimensional image, a “point cloud” that can be analyzed for measurements of vegetation density, diversity of tree heights, canopy openings and understory gaps.

Here is an image from a monitoring site on Beech Mountain where the spruce trees are 150 years old, and a corresponding image from Werning’s laser scanning: 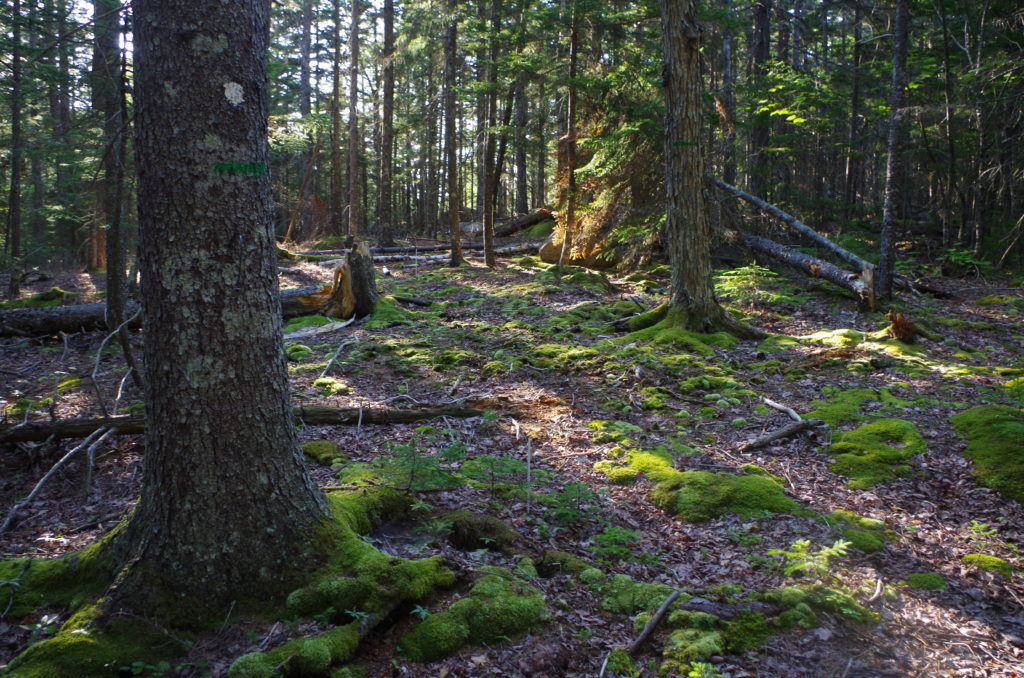 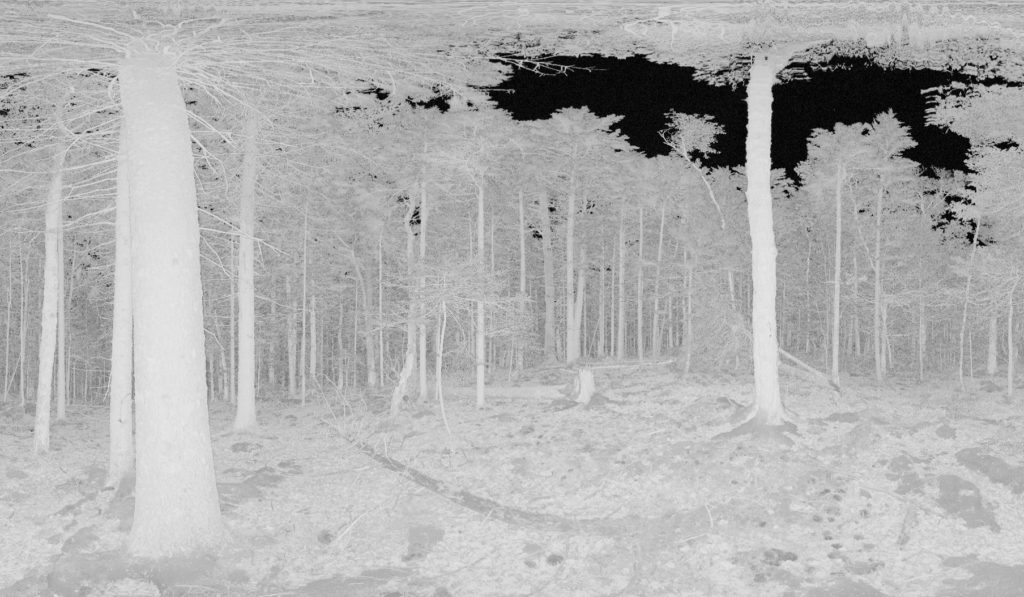 “Older forests have different species of trees in many different ages in the same spot,” said Werning. “This creates horizontal and vertical structure that we describe as a mosaic, or tessellated.”

Complexity fosters diversity. The American marten dens in logs of large fallen trees; the winter wren nests in the upturned roots. Brown creepers build their nests in the loose bark of dead and dying trees, and forage on large trees. The black-throated blue warbler favors tall trees and dense understory.

Old forests are messy forests, with fallen trees everywhere that are quickly overgrown with moss, their shapes discernible beneath the green carpet. Moss grows on the ground, the rocks, and the base of tree trunks, down hollows and over mounds that are the remnants of long-ago tipped-over trees. According to Kate Miller, most of the diversity is actually in these layers of mosses and lichens on bark and ground. Some of the lichens are rare, and considered to be indicators of a forest environment that has persisted for centuries. A true sign of an old forest is more than fifty percent moss cover.

And in that moss, which holds moisture and minerals, seeds sprout. Lines of seedlings grow on “nurse logs,” gaining nutrition from the decay. Saplings grow old on the shoulders of fallen giants.

“The understory is the life insurance policy for the forest,” said Miller. “If you don’t have little trees, you don’t get big trees. My heart is with the plants in the understory layer. That’s why I got into this.”

In 1889, Edward Rand published a series of articles in the Mount Desert Herald about the Mount Desert woods. He wrote, “Today the steep side of Beech Mountain still shows some of the oldest, most beautiful woods on the island…[it] seems to me highly necessary that certain portions of the island should be preserved in their wild condition…protected, for the use and enjoyment of the public, against devastation by the axe or by fire. The mountain summits must be freely accessible to all; the growth of woods must be encouraged for the sake of natural beauty, for the rest and change that they present to the summer visitor, and for the protection that they afford.”

His words did not go unheeded; one of his friends and fellow Champlain Society members Charles Eliot inspired his father, Charles William Eliot, to work with George Dorr to purchase and protect lands that became Acadia National Park, including Beech Mountain, which still shows some of the oldest, most beautiful woods on the island.

Acadia is a place where groves of old trees still stand today, trees that have already lived through saw and flame, ice storms and hurricanes, pest and disease, drought and acid rains. In this experience there is a kind of wisdom, and resilience. How these old stands use their wisdom and respond to warming temperatures and other stress remains to be seen. “These old stands are protected within a national park, and at minimum, have the time and space to respond to the current range of stressors society is throwing at them,” said Forest Ecology Director Nicholas Fisichelli. Major disturbances pose the greatest immediate threat, whether from stronger wind storms, pests, or diseases. And when that happens, Kate Miller will be watching the understory, counting the seedlings, and helping the forest be what it wants to be. 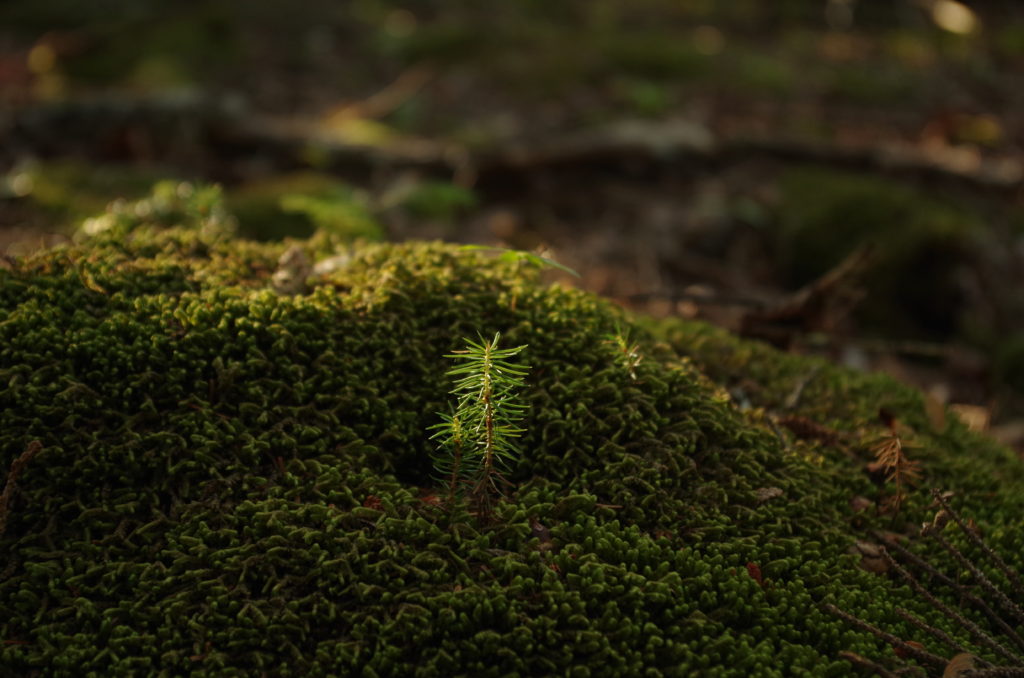