In June, just off the Sluiceway Trail on Western Mountain in Acadia National Park, a crew of Schoodic Institute forest technicians with the National Park Service Inventory & Monitoring program collected data from a 15 x 15 meter square in the forest. As Devon measured the diameter of every tree (15 inches or more and it’s an “old” tree), Diana looked up to the canopy with binoculars to assess the tree’s health from its tiptop leaves. Camilla waved away mosquitoes as she entered the numbers being called out into a laptop computer. Next, they counted every seedling and sapling in several smaller sub-plots. They estimated the amount of “coarse woody debris,” the scientific term for fallen logs. Then they kneeled around a smaller square and made a list of the plants at ground level (starflower, poverty oats, sedges, ricegrass). With their noses close to the soil, eyes trained to see hints of chlorophyll green amid the brown, they scanned the dirt for the first sign of seedlings (striped maple, red maple, birch, fir). 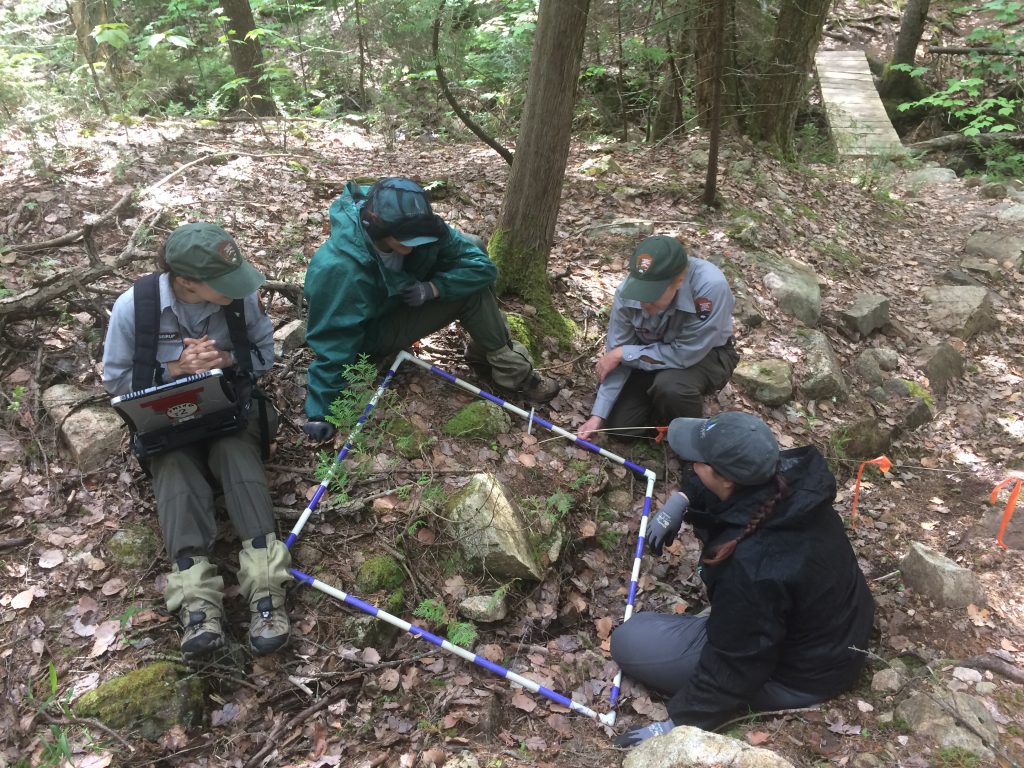 They were doing all of this because the present state of the woods, the miniscule beginnings of trees, are like a savings account for the forest, wealth to be drawn upon in time of need, a source of resilience.

In contrast, a forest without new green growth has nothing to rely upon for renewal.

Scientists use the term “regeneration” to describe how a forest grows back after disturbance. Clearing, cutting, storms, and fire create openings in the forest canopy where seeds sprout and saplings stretch for the sky. It is a vulnerable time, as young trees are more sensitive to temperature swings, rainstorms, and drought. But a forest that can re-grow, and do so quickly, is more likely to withstand stress.

“A forest with a lot of older trees might seem healthy, but without sufficient numbers of seedlings and saplings in the understory, the forest could fail to regenerate, or if there are different species of trees, it could re-grow as a totally different kind of forest,” said Kate Miller, plant ecologist with the Northeast Temperate Network. 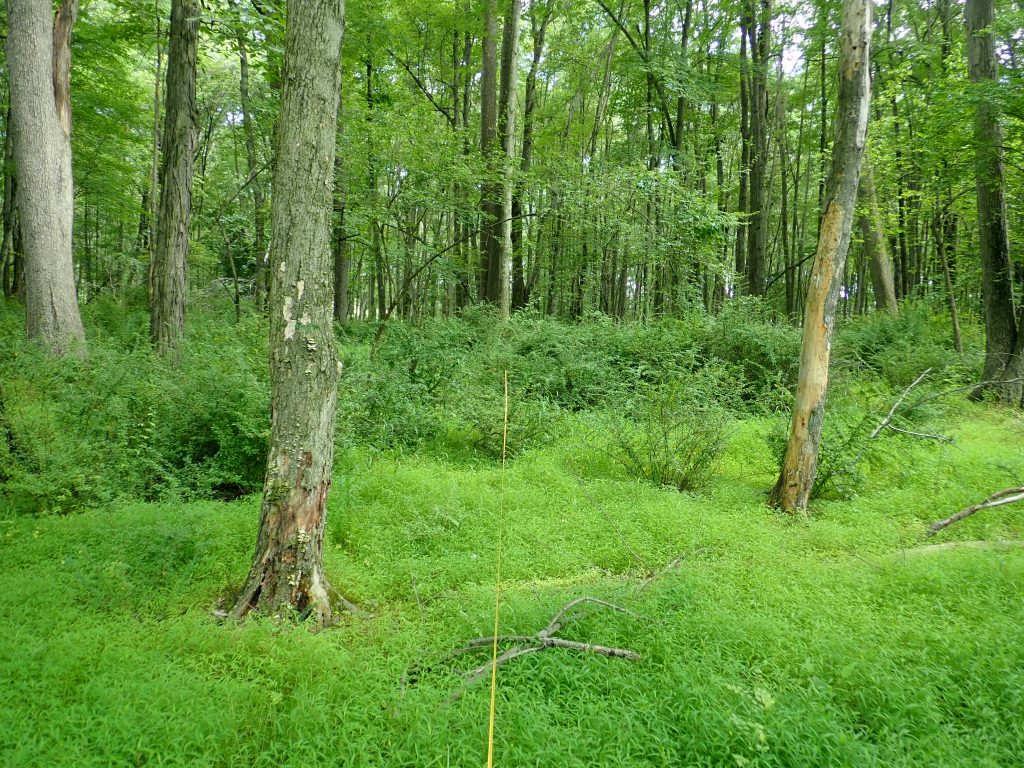 After sampling Northeastern parks, the forest crew moved south to survey parks in the Mid-Atlantic region. At the forest plot in Valley Forge National Historical Park in Pennsylvania (pictured above), they found no native seedlings or saplings. Year after year, stress—from invasive species, hungry deer, and land development—has led to an understory full of invasive vines and shrubs. The savings account is empty, a situation Miller calls “regeneration debt.”

As part of her Ph.D. work at the University of Maine, Miller and her advisor Brian McGill looked at the understory across 18 eastern states, and related their findings to similar patterns being seen in eastern parks by the NPS Inventory & Monitoring Programs.

From Massachusetts through northern Virgnia, seedlings are few and far between. Nearly half of the area is experiencing some form of regeneration failure. Where forest does exist, it is fragmented in isolated patches or the understory is composed of different species than the canopies. Things are most severe between Washington, DC and New York City, the largest swath of urbanized land in the country that also happens to lie between the oak, hickory, and pine forests of the south and the region of birch, maple, and spruce to the north.

The persistence of forests may depend on the ability of tree seeds to reach and grow in the newly suitable habitat that is created by a changing climate. Such “migration” was the primary way trees adapted to climate change in the past. Problem is, scientists have found little evidence that migration is currently taking place.

In the case of the Northeast, all those buildings, parking lots, industrial sites, and roads present a barrier to trees spreading north. 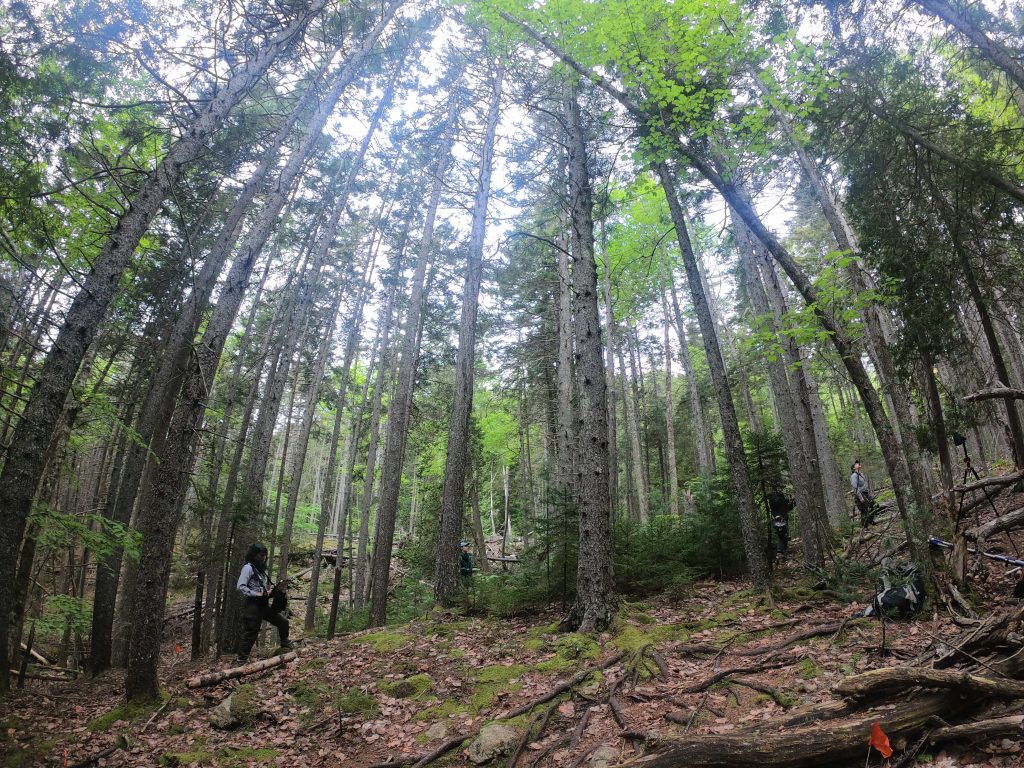 Debts incurred by one generation are passed on to the next. One generation burns fossil fuels, and the next pays for the damage. Trauma inflicted on grandparents and parents is felt by the child. A forest without a new generation of trees to replace the elders as they fall has a deficit that must be accounted for. The debt comes due, and the forest changes, or disappears altogether, affecting the next generation of forest in that place—and beyond.

The 2019 forest monitoring data collected by the NPS Inventory & Monitoring Program suggest a vibrant understory in Acadia. But as Maine becomes less hospitable to cold-adapted trees like spruce and fir, for there to still be any kind of “forest,” eventually new trees will have to take their place.

“The southern trees aren’t going to save us,” said Miller, “because they can’t get here due to all the fragmentation.”

Knowing this, Acadia’s scientists and managers are taking action.

Worried that clearings could be filled by invasive species that thrive in disturbed areas, Acadia National Park’s Exotic Plant Management Program staff carefully monitor and quickly respond to invasive plants, so that when the disturbance comes and there’s space in the forests, aggressive growers like glossy buckthorn or barberry have no opportunity to take root.

Recognizing the importance of connected landscapes, Acadia National Park is part of the Schoodic-to-Schoodic forest plan to conserve a contiguous area of spruce-fir forest from the shores of Schoodic Point to the summit of Schoodic Mountain.

And experimental plantings of those southerly trees—oaks, hickories, loblolly and Virginia pines—in tree test beds and campus gardens, are showing which trees are more likely to thrive in the future forest of Acadia, and how, with gratitude, human hands might pay back the debt incurred upon the land. 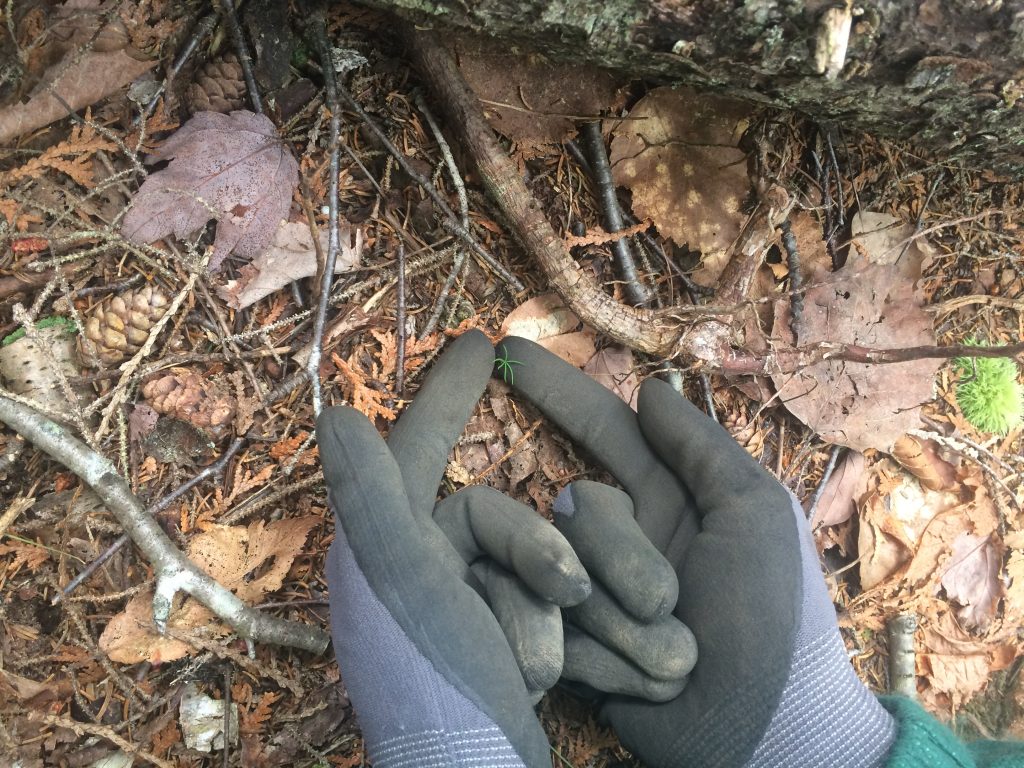