Story and photos by Catherine Schmitt

Since the Bear or Scrub Oak (Quercus ilicifolia) on Mount Desert Island is confined to the summit of Acadia Mountain, it naturally attracts considerable attention….The plants, except on the north slope, come down to the 225 foot contour and grow clear to the summit (680 feet). This is the same species of oak that covers thousands of acres on the hot sandy plains of Long Island and New Jersey. How this scrubby tree got started and why it does not grow on other mountains on the island remain a mystery. – Margaret Stupka, Nature Notes from Acadia,  1932

In late fall, the oaks on Acadia Mountain are shades of tan, auburn, and rust. They are small, tangled, and dry-looking, true to their name, “scrub” oaks. They are short, clumped beneath scattered pitch pines, and so the trail provides open views of St. Saveur and Flying Mountains, Somes Sound, and the Atlantic Ocean. The next closest groves of these oaks are to the south, in the Camden Hills, and then in southern Maine. These scrub oaks are on the “edge of their range” – like many species in Acadia, a place where temperate and boreal forests overlap. 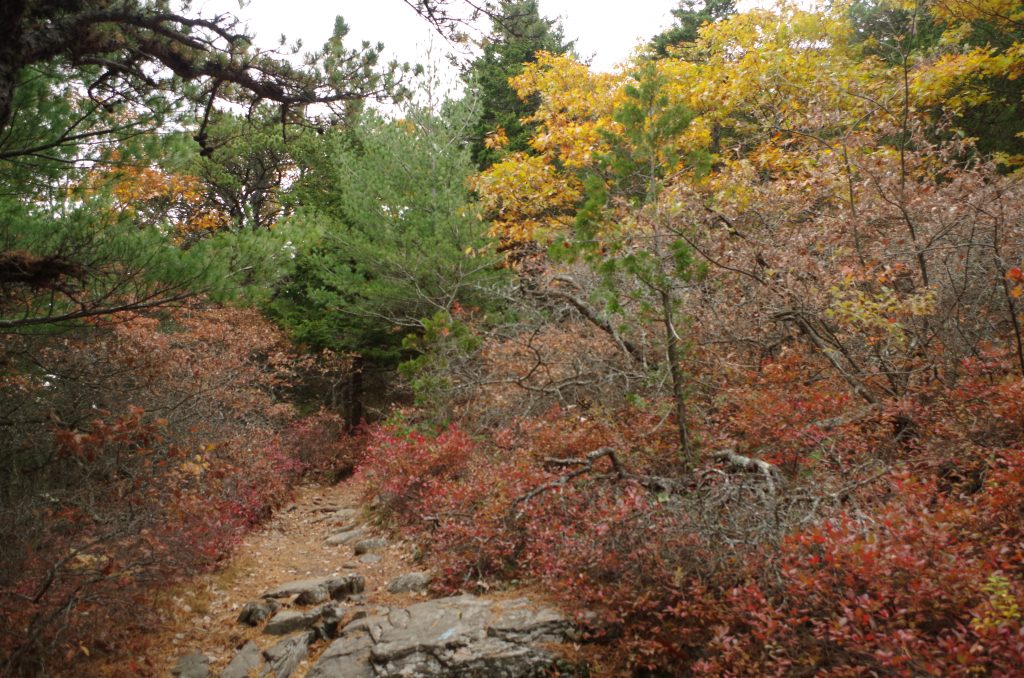 As temperatures increase, some trees in the forest may no longer grow in their ideal habitat. It may get too hot, too wet, or too dry, or the tree may have to deal with unfamiliar insects and diseases brought by changing conditions. For a tree species to live on, it will need to adjust to the new climate, or “migrate” to new areas that better match their ideal home environment.

When scientists say tree migration, they are really talking about seed dispersal, because the only way most trees relocate is if their seeds are carried by the wind or an animal to a new place. While Kate Miller and the invasive plant patrol at Acadia focus on the territory (the structure of the forest and its surrounding landscape), other scientists focus on how tree species take root and spread—which means they are actually studying the animals that eat tree seeds, cones, and fruits: birds, mice, voles, squirrels, and chipmunks.

Rodents are especially ravenous tree seed predators, constantly darting about the understory in search of food, digging among the leaf litter. They can harvest up to 95 percent of cones or seeds available in their territory—thousands in a single season—and by selecting specific seeds and rejecting others, they can alter entire forests. They, and their decisions, have a big influence on which plant species will grow successfully in the future forest.

What does this mean for the bear oak of Acadia Mountain? As Acadia becomes warmer, presumably more habitat will be suitable for the species. But how does it get there? 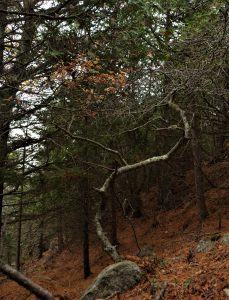 Somewhere at the edge of the stand is the northernmost bear oak. Chipmunks and red squirrels in the area have become accustomed to the tiny acorns of the small, scrubby tree. Maybe they even prefer them, a kind of hyperlocal treat. Imagine, then, a squirrel is feeding around the northernmost bear oak, and carries some of the acorns some distance away from the existing stand, to the north, stashing them away for a winter’s snack. Not all of the stashed acorns get eaten. The place where they are stashed continues to warm. Conditions are right. The acorn sprouts, and in another two years there could be a new northernmost tree—the tree has “migrated.”

But this is not a process that can be easily observed, and no one seems to know about or be watching the northernmost or southernmost individual trees. Instead, scientists use experiments to test how animals might react to new seeds and nuts. How will squirrels who live on the northern slope of Acadia Mountain in the spruce forest react to bear oak acorns? Do they eat the novel food or ignore it? Do they take the acorns and hide them for eating later, thus helping the bear oak spread?

Second Century Stewardship Fellow Alessio Mortelliti, an assistant professor of wildlife habitat conservation at the University of Maine, studied these potential future interactions, setting out plates of tree seeds in cages with infrared cameras to capture rodents and watch their decisions. He also tagged some seeds to track how far away the rodents carried them—an important question, since it determines how “fast” trees can migrate. The farther a seed can travel, the more easily a tree can find new home ground.

Of the “future” trees, rodents in the experiments preferred several oak and hickory seeds—even more than seeds they regularly encounter like balsam fir and white pine. The preferred seeds were generally larger, with a thicker, harder shell. They also stashed these seeds farther distances, thus aiding the potential migration rate and distance for some of the southern tree species. 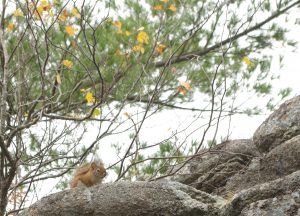 “The seeds that mammals like the most are also being carried the farthest distances,” said Nicholas Fisichelli, a forest ecologist and Interim President and CEO of Schoodic Institute. “So, if you’re the lucky nut that gets taken a long ways and then forgotten, you could be the leading, range-edge individual for your species. The seeds not selected don’t get this benefit of assistance—acorns only roll so far on their own.”

Mortelliti didn’t include bear oak in his study, but given their tiny size and thin shells, they probably aren’t preferred. (According to Go Botany, the species got its name because only bears eat the acorns due to their bitter taste.) Tough luck for the bear oak, which is not predicted to have expanded habitat by a recent assessment that Fisichelli was involved in. That study projected little change in future bear oak habitat, but increased habitat for pitch pine and other oaks. Mortelliti’s results suggest that squirrels and other small mammals will help some of those species expand their ranges and take full advantage of these new habitats in Acadia.

Mortelliti’s work provides insight on which trees might need some help getting to new habitat, especially given the urbanization and fragmentation that may block their path (“trees can’t get here from there”).

In the 1993 Resource Management Plan for Acadia National Park, scrub oak is identified as being at the edge of its range. The plan then goes on to say about the small population on the western edge of Somes Sound, “Park management will determine if these stands are to be artificially maintained or if ecological succession will be allowed to function unimpeded which may result in the possible loss of this species in the park.” If park managers decide that Acadia’s bear oaks are important to protect (because they are a unique community; because they represent the northernmost bear oaks along the Atlantic coast; because they are threatened and endangered elsewhere; because they are associated with certain ants and beetles and butterflies like the Dusted Skipper, Southern Cloudywing, Sleepy Duskywing, and Coral Hairstreak), then they could do things to encourage bear oaks to persist and/or spread, for example by keeping out red maples and other shade-inducing broad-leaf trees, planting seedlings, transplanting acorns, or monitoring the existing trees as conditions change to see if Mortelliti’s and Fisichelli’s predictions are correct and adjust management as they learn more.

As the climate changes, the National Park Service and other conservation agencies are facing more decisions like these. How “to preserve unimpaired” when the world is changing so quickly? When to play an active role and when to leave it to the squirrels and the lucky nuts that are able to reach new homes as conditions change?

“It is not an easy time to be making management decisions in national parks,” says Rebecca Cole-Will, Chief of Resource Management for Acadia National Park. “The work of scientists like Alessio and Nick and the dozens of others who study in Acadia National Park gives us tools to make informed decisions at a challenging time.”

According to the U.S. Forest Service, bear oak is an adaptable species that rapidly grows back when clearcut or burned. It is cold-hardy and tolerant of drought but tends to grow in low-lying frost pockets on sandy, nutrient-poor soils, which may limit its ability to expand.

“As spruce, fir, and birch start to disappear from our mountainsides, bear oak would be a good low-growing species adapted to poor soil conditions to promote along with the pitch pine,” said Acadia National Park vegetation biologist Jesse Wheeler. “If we do value bear oak’s importance in Acadia, than we would want to monitor this population more closely in light of this recent research.”

Fisichelli is testing the growth of warm-adapted oaks like chestnut oak and white oak in Acadia’s climate. These warm-adapted species are found in southern and central Maine, but haven’t yet made it on their own into Acadia. Yet, at lower elevations and coastal locations, seedlings of these species have similar growth and survival rates to that of local trees (red oak, red spruce, and balsam fir). “These trends are for seedlings less than five years old,” said Fisichelli. “We don’t know yet whether these species will survive long-term and transition from the understory to the ranks of the overstory.” Fisichelli is testing this long-term question outside the park in forests along the coast from Belfast to Schoodic.

In the meantime, on the high slopes of Acadia Mountain, the bear oaks continue growing, dropping acorns to the ground in a risky strategy that requires help—and a bit of luck—to succeed. 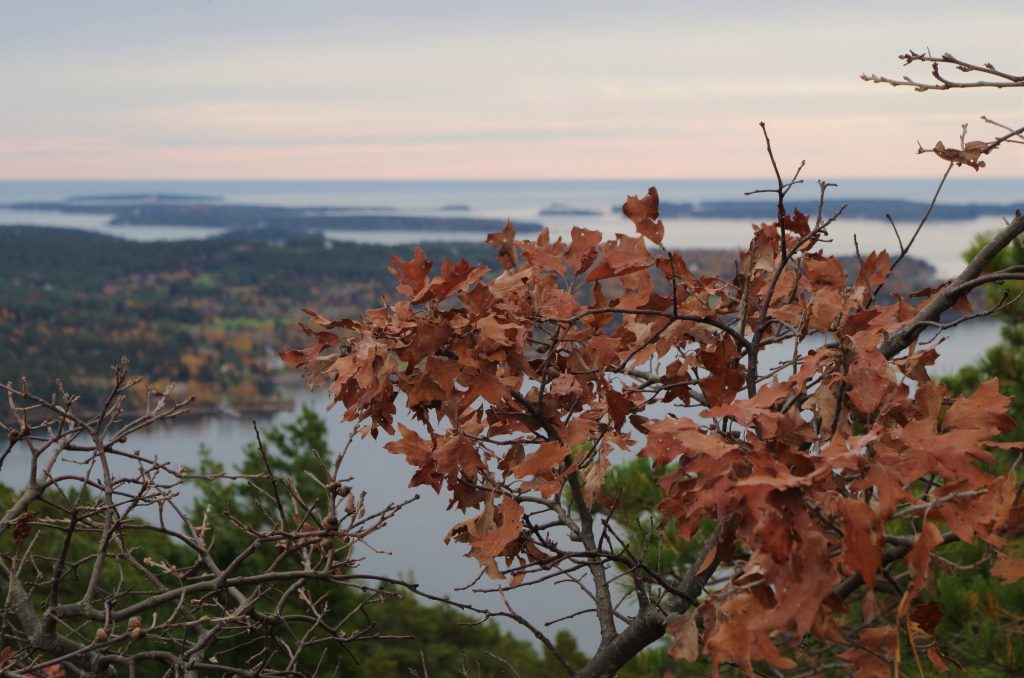