Story and photos by Catherine Schmitt

Trees give it all way, don’t they?  – Richard Powers, The Overstory

Winter has come to Acadia’s forests. Snow and ice cover the ground and even some of the trees. Most of the understory is dormant, although the exposed mosses, lichens, and evergreens continue to make sugar from sunlight, slowly.

Up in the canopy, the wind and freezing rain that accompany Nor’easters this time of year are a major force of change, knocking down tall trees and branches. These storm-wrenched openings, and the edges of forests, are where change will be noticeable—noticeable because people like Kate Miller, Jesse Wheeler, and Nick Fisichelli are watching, and because other influences like timber harvesting and invasive plants don’t complicate the picture. What people learn about the forest here can inform efforts to manage forests elsewhere, which is not an easy task.

This series has examined moments in the life of Acadia’s forest. Each moment is the subject of study by scientists who are part of a community of caretakers, and each moment is a chance for forest success, or failure. 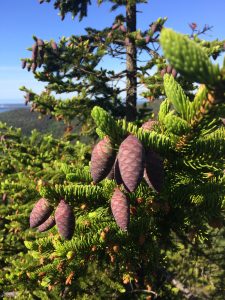 First, trees have to produce seeds. This can take years—two years for some oaks, 40 years for a beech tree. The Northeast Temperate Network forest monitoring crews measure the health of trees, peering through binoculars to see if the crowns are free of insect bites and disease, if shiny cones crowd the tops of spruces and pines.

Next, seeds have to be dispersed (or given away), through gravity, wind, or animal predators. Second Century Stewardship fellow Alessio Mortelliti studies the role of small mammals in deciding the future forest, a reminder that forest stories are always about more than trees. They are also more connected than we might think. NPS plant ecologist Kate Miller has shown that a vast area of degraded, fragmented, and absent forest to the south of Acadia could prevent trees from naturally spreading to new habitat—an alarming study that deserves more scrutiny. This series focused on the implications for Acadia—but what does it mean for the 50 million people living in the Northeast megalopolis that much of their forest is not regenerating?

Once a nut, acorn, samara, cone, or catkin reaches the ground, the seed has to germinate, take root, and grow. This phase is the subject of Schoodic Institute research by Nick Fisichelli, in partnership with organizations and institutions across the state. These studies are ongoing, but already are providing a glimpse into which “new” species might thrive here, and which areas might serve as “refugia” for current trees to persist—places that, because of their particular unique topography or geography, are resistant to changes in temperature and precipitation. For example, after the last ice age, while the rest of the state became dry and warm, Acadia’s proximity to the Gulf of Maine kept things cool and moist, allowing spruce and fir to continue to grow here continuously for thousands of years. Could the same thing happen again?

This research is borne of the conviction that forests are important, that we want to have forests in the future, so we’d better be ready, because change is coming. In the understory, wildflowers have a shrinking window of light in which to bloom as trees leaf out earlier.

The life of a forest continues when the trees age out of the understory into the canopy. Their roots sink deep into the soil, entwining and grafting into one another. Above and below, trees in the forest become one. The elder forests of Acadia support the growth of young trees, and provide habitat for other species. An old forest in June is cushioned with moss, crusted with lichen, clouded with mosquitoes, filled with the tinkling tune of a winter wren, pulsing with energy.

In his book The Songs of Trees, David Haskell wrote that stands of ancient trees and other places that suggest permanence or durability lift our spirits. But permanence is an illusion. The forest is always changing, and to be sure of it we need only to look at the understory. So what is it about a forest that truly lifts our spirits? What endures amid the change?

Trees witness. The forest remembers. A tree build layers of living tissue beneath the bark to carry water and nutrients from root to crown. Every season, new layers become old and sapwood turns to heartwood, holding memories of the year’s rain, drought, cold, and sun, circles within circles connecting past to future. 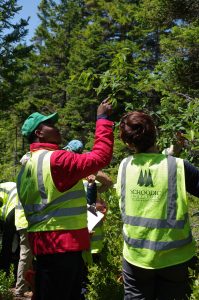 And more and more, people concerned about the future are turning to the trees. As forest trees use the power of the sun to grow through photosynthesis, they withdraw or “sequester” carbon dioxide, and then they “store” carbon in their leaves, wood, and soil. Carbon sequestration rates are highest in middle-aged forests (30-70 years old), and may increase as temperatures warm. Carbon storage is greatest in forests 200 years old or older; Acadia’s elder forests are approaching this age.

Of course, this is just trees doing what trees do.

But the need to reduce the amount of carbon dioxide in the atmosphere has prompted calls for massive reforestation efforts, both around the globe and in Maine and the Northeast, where in the last three decades we have been steadily losing forest, mostly to rural or low-density residential, commercial, and industrial development. Some forest scholars have proposed that keeping forests as forests is the single most important action land owners can take to reduce the impact of climate change.

Decisions will be made, and the forest will remember…”Northern forests will gradually come to bear the imprint of future human choices,” concluded a report on The Future of the Northern Forest, and those choices will depend on whether or not we (re)strengthen human connections to trees.

The urgency of climate change, and what to do about it, extends to the forest monitoring and research featured in this series, which focused on the dynamic layer of the forest where change can be detected. There, beneath the snow, another season awaits. A few months from now, wildflowers will bloom, seeds will sprout, saplings will shoot for the patches of sky between the branches overhead, trees will grow thicker and taller, and eventually fall back to the ground from which they came, once more becoming part of the understory, where the future forest of Acadia begins. 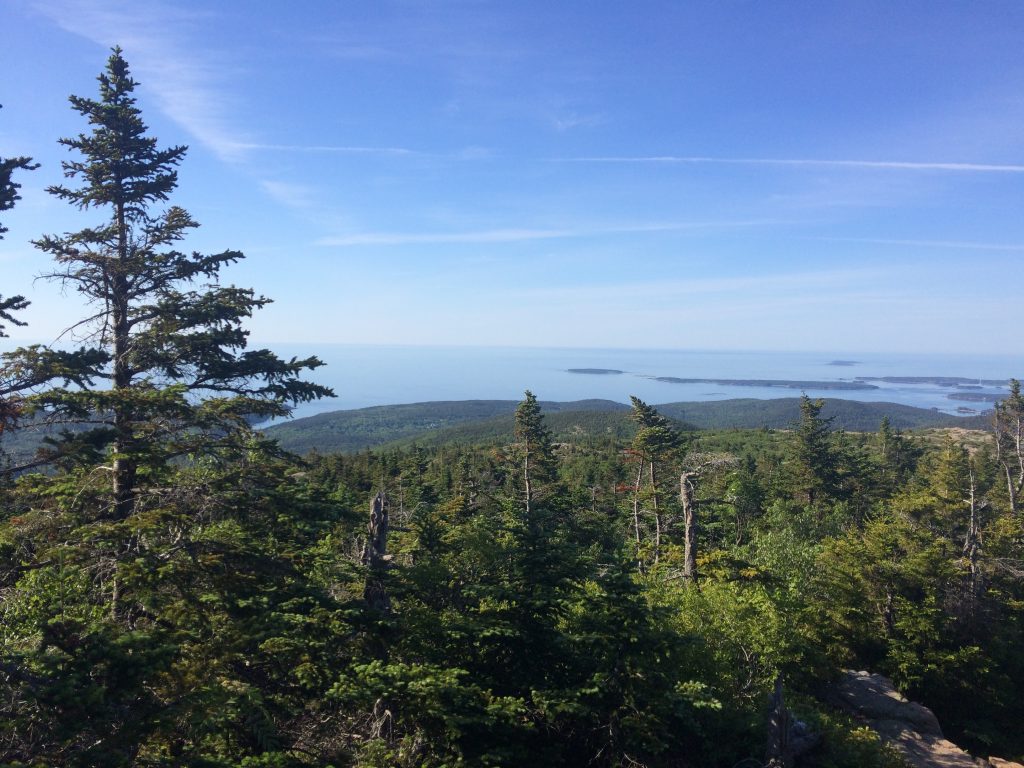